Scarlet rises from the ashes 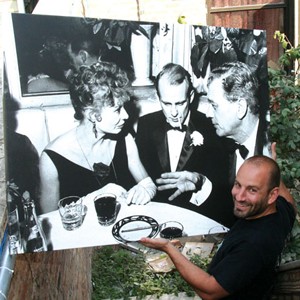 paul cannella with the only photo to survive the fire.

photo credit // ross forman
Chicago, IL - Paul Cannella is excited for that next Peroni, knowing it will be cold, enjoyable, rewarding and oh-so-emotional. He'll share the moment—and maybe even a sip or two—with family, friends and strangers. It's been seven months since the last beer Cannella truly enjoyed.

On Feb. 26, the folks at Scarlet, 3320 N. Halsted, the Lakeview bar that Cannella owns, had its second-best night since he took over management of the bar in late 2007. It was Frat House Night that Thursday and it was simply a financial success—for Cannella and his entire staff.

He went to an after-hours bar that night, still elated from the Scarlet success that night, ultimately returning to his home in Lincoln Park at about 4 a.m.

Cannella was awake a few hours later, by choice, and, by 7:30 a.m., his cell phone was non-stop. Text messages and phone calls. Everyone was reaching out to the friendly, outgoing Cannella. He was told there was a fire at the locksmith located a few doors away from Scarlet, the former Gentry. Then Cannella was told that, in reality, the fire was in Scarlet.

Cannella jumped into action, first calling the bar's manager who lived upstairs. No answer. So Cannella walked his dogs and drove to the area, being forced to stop and park his car just south of Belmont Street.

He walked toward the fire and the walk quickly turned into a sprint.

"The first thing that crossed my mind at this point was, 'Did everyone get out?'" Cannella said.

It was an hour before Cannella knew for certain that all who lived on the two stories of apartments above Scarlet—three residents per floor—had survived, unharmed.

The building, though, was completely destroyed.

The fire started on the second floor, in a bedroom. The official fire department finding attributed the cause of the blaze: smoking in bed.

"It's a 100-year-old building, so it doesn't take much for it to go up [ in flames ] very quickly," Cannella said. "The second floor was nearly completely ruined by fire.

On the third floor, there was basically no fire damage [ because of the fire's pattern of movement ] , but there was no roof; it had fallen through."

Cannella stood across the street, in the Sherwin Williams parking lot, completely devastated. His dream was burning and he was helpless. He talked to his parents, Frank and Joan, on his cell phone.

Cannella couldn't stop crying. "It was hard [ to watch ] ," he said, still fighting back tears seven months later. "I still remember looking up, seeing the fire, knowing that my dreams and, ugh, everything in my life was changing right there in front of me."

Cannella had resigned from his corporate job in January to run the bar full-time. His future that frozen February morning was, frozen in time.

The calendar inside his storage unit behind Scarlet is still on February. On Feb. 27, the date is crossed out and someone wrote "FIRE."

On March 2, the entire building was deemed a total loss, including the jobs of the 20 employees who called Cannella their boss.

"I've tried to think about [ the fire's impact ] many, many ways," Cannella said. "From the people who were impacted, it has to be 30-50 people job-wise, which includes employees, distributors, suppliers, etc. Hey, we were the No. 1 Red Bull buyer on the street and the No. 2 Stoli [ purchaser ] .

"It was a major [ financial loss ] , a scary amount [ of money lost ] . It's hard to measure the total impact, but at least $3 million, which includes loss of revenue, loss of building, etc. And that number probably is conservative."

The fire was a five-alarm blaze that required more than 3 million gallons of water to extinguish. "It was like a river coming out the front [ door ] ," Cannella said. "We had no fire damage in Scarlet, just water [ damage ] ."

The entire bar was destroyed, destined for the trash dumpster—except for one photo and a couple pieces of stained glass. They will, of course, find a home in the new Scarlet.

Yes, Cannella and crew are coming back—bigger, stronger and more determined than ever. Scarlet will reopen in September.

"My immediate reaction [ when it was deemed a total loss ] was, 'How do you fix it? I immediately wanted to gut it so the bar could reopen ASAP. But it's not that easy of a process. They didn't know if this building was going to be re-certified," said Cannella, who also has had to deal with issues involving insurance, permits and much more. He only wishes he just had the stereotypical bar drama.

"I hope that I can learn from this and I know that the first beer [ when Scarlet reopens ] is just going to taste that much better," he said. "I just try to move forward and stay positive, always.

"If I had my choice of sitting back in the corporate world behind a desk, or doing this? Well, there hasn't been a single hesitation that I'd much rather do this, even with this life experience. As the saying goes: that which doesn't kill you makes you stronger."

Cannella is excited to reopen, to unlock the front door again, to hear the distinctive noise that the lock makes and, of course, hear the register again. He knows plenty of family and friends will be around that first week when the doors reopen, but it's the newcomers—the Scarlet rookies—who he truly wants to see. "That's when it will hit me," Cannella said.

"I think we're going to come roaring back. It's fun designing a bar, though I certainly wish it was under different circumstances. It was fun during the first remodel [ in 2007 ] , and fun now too. This is a fun business."

And a new-looking bar, too, starting with the main entrance—which is now on the right side.

Scarlet will now be four feet larger in the front, extending all the way to the sidewalk. There also is a featured seating area in the front, dubbed Table One. This area will double as a stage at times.

In addition, there will be a large glass window to the outside. There will also be a den-like area in the middle of the bar, featuring classic furniture.

All of the mechanicals were moved into the basement, so another four or five feet were added in the back. And the rear bar was moved to the other side, the left side.

The main bar is larger and more functional. The DJ booth also is now larger, as are both bathrooms.

And capacity has increased by 30 percent to almost 1,000 square feet.

There also will be a new antique disco ball near the front and a 10-foot photo of a drag queen from the 1920s.

"We tried to take the best designs from the old bar, correct some areas, and make this a new and improved Scarlet … with the same carefree, no-attitude-allowed bar," Cannella said.

There also will be free wi-fi in Scarlet, with coffee available during the afternoons, ideal for business meetings or study groups.

"People throughout the neighborhood and community really rose to the challenge, to immediately help those affected by the fire. There were fund-raisers at other bars, clothing donations, and so much more," Cannella said. "Bitter? Not one bit. I try to be positive in anything and everything I do in life.

"But this was a test, no doubt about it.

"There were times I didn't want to get out of bed, or do anything. But, I know that, when you get knocked down, you get right back up. If you're bitter, you're just not going to have a very happy life.

"No one was hurt; that's most important. Everything else is replaceable. That's all that matters. It certainly could have been worse than it was."

Cannella said the bar will have a themed party in the first month or so after it reopens to acknowledge the fire, including hot firemen and a charity element to the evening. "We want to acknowledge the fire; it's part of the history of this bar," he said. "The Scarlet people will see when we reopen will be a lot like the old, original Scarlet, with the same attitude [ among employees and patrons ] : no attitude and very welcoming for everyone [ aged ] 21 to 91.

"Everyone is welcome and will have fun."