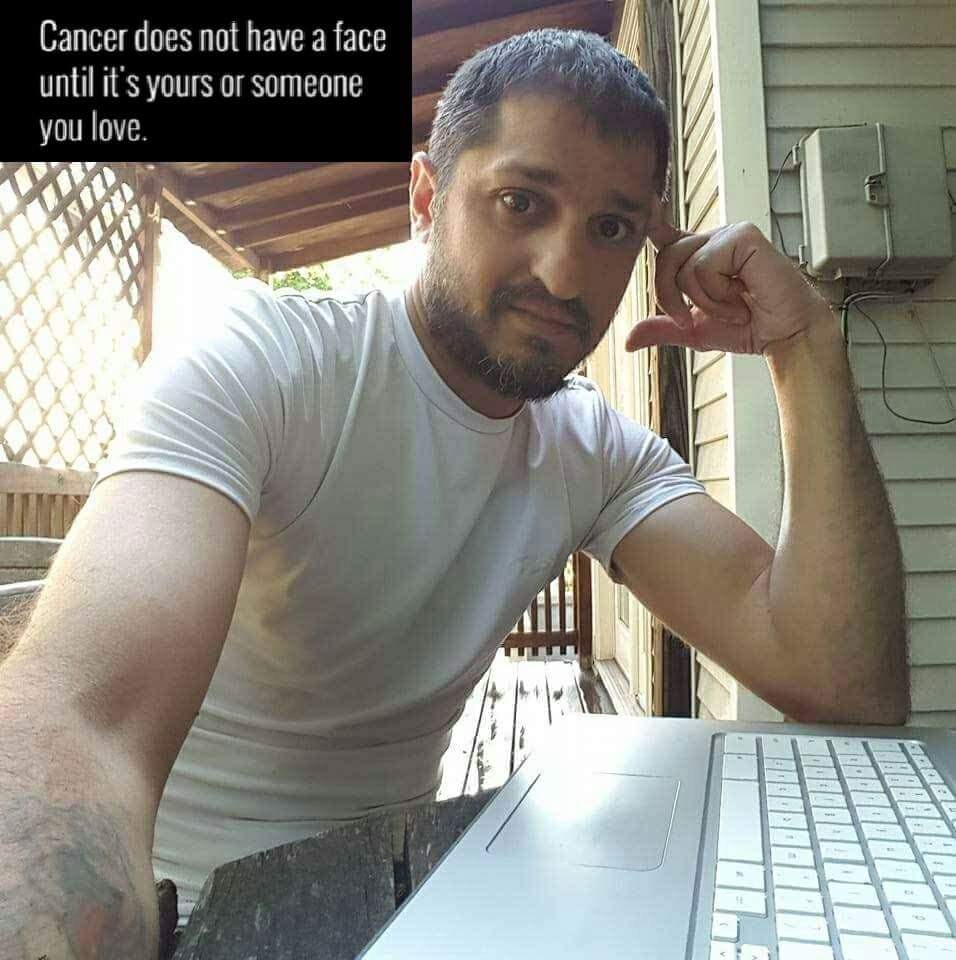 Reeve Lazar was tired, lacked energy and his appetite had diminished. He dropped from 140 pounds to 125.

"Anyone who knows me knows that I'm super hyper and always on the go and I had been so proud of putting on weight, (which) had always been a struggle for me," Lazar said.

Then in late-August, he started having complications with bowel movements and was bleeding constantly.

After two weeks, he finally went to Northwestern's Urgent Care. They did some basic tests and everything was coming back normal, he said, but his fecal sample tested positive for some sort of infection. So they gave him a referral for a colonoscopy, which led to his doctor determining what the issue was.

Lazar was diagnosed with an early stage of Non-Hodgkin's Lymphoma.

Lazar naturally was shocked, though that was quickly followed by relief as he now knew what the issue was.

Lazar immediately thought about his husband of 14 years, Daniel Hauff, and the obvious – "How much time do I have left?"

He started Rituxan treatment almost immediately, with weekly IV injections that lasted anywhere from four to six hours. "The Rituxan pretty much killed a lot of my white blood cells, which made me prone to further infections and made simple cuts harder to heal," Lazar said. "The first treatment was pretty easy, although I was physically drained for a few days after. The second treatment was rough as nurses found it difficult to administer the IV. After five attempts and three nurses, they finally were able to find a vein.

"This was the first time that I actually broke down crying in front of Dann."

Every week thereafter, the treatments were easier to handle, he said, "though I felt like crap for a few days afterwards."

Lazar said Hauff has been side by side with him throughout the medical journey. He hasn't missed a hospital visit, "and he keeps my spirits up, even though I know the fact that I'm in pain hurts him deeply," Lazar said. "My mom also has been there for us, providing support in whatever capacity we needed. And my best friend Rob has been a wonderful shoulder to put my head on and just talk."

The rainbow was ultra bright for Lazar on Feb. 23 – as he proudly posted on Facebook, "After a long road lasting seven months, I can finally say I beat my cancer! The Rituxan treatments have killed all of the cells that were latching onto my lymph nodes. Thank you to the staff at Northwestern Memorial for taking such great care of me. Today I begin again. And to those that are still battling, keep battling because that is what we do. We fight until the bitter end."

Cancer, Lazar said, "has humbled me."

"I spent many nights crying while taking long walks alone. It's made me a stronger person," he said.

Lazar, 42, lives in Chicago's Logan Square neighborhood and is a branch manager for Chase Bank.

It sure has been a long, still-not-over journey since last September when he was diagnosed. A friend who he has known for more than 20 years came into his branch to use the ATM. They were talking and Lazar received a call from his doctor. That's when he learned it was cancer.

"At first, I was rather lethargic and couldn't do simple things I love, such as walk my dogs, go to the gym, play softball to the best of my abilities, work without becoming exhausted, etc.," Lazar said. "Thankfully the Rituxan treatments worked their magic where slowly my energy started coming back, the internal bleeding stopped and the infection cleared up."

A few weeks ago, Lazar was given the green-light to resume normal activities, including being able to play softball again and working out without any restrictions.

"I'm just trying to enjoy every moment I have. I've embraced the concept that I am a person who has cancer, but cancer doesn't have me. I will not let it beat me," Lazar said.

To that, he has been very open, very public about his battle with cancer, and he's anchored his social media updates around a special hashtag: #FightCancerWithLove.

"I met some beautiful people during my treatment at Northwestern Memorial (Hospital)," Lazar said. "Walking past rooms that had people just like me fighting their own cancer battles was very eye-opening. Some had friends or loved ones with them and some were alone. The (hashtag) came after I met Sophie from Gilda's Club (Gildasclubchicago.com). She came into my room and there was an instant connection. We laughed. We created art work, such as mummies, and painted ghosts using rocks. (It was) simple things that made me and Dann light up.

"It was then that I knew that the love of family, friends and anyone who'd listen was the only way I could beat this thing. So (the hashtag) #FightCancerWithLove was born."

Opening up publically about a very private matter was a form of therapy, he said.

"I've never been good at talking about my feelings, (but) cancer allowed me to finally open up," he said. "(Talking about my cancer journey) has been remarkable.

"I've received so many text messages, calls, visits and Facebook private messages from friends, acquaintances and strangers who've opened up to me about their own struggles. I never knew that saying I have cancer would bring people closer to me. Not because they felt sorry for me, but because they felt that I'd understand what they are going through.

Lazar added: "I was lucky that I had symptoms that forced me to go get looked at. Never assume that you are healthy just because nothing out of the ordinary is happening health-wise. Make it a habit to go get checked regularly. We have one life, so we must do everything in our power to protect and look over it.

"Any battle you have, fight it with love."