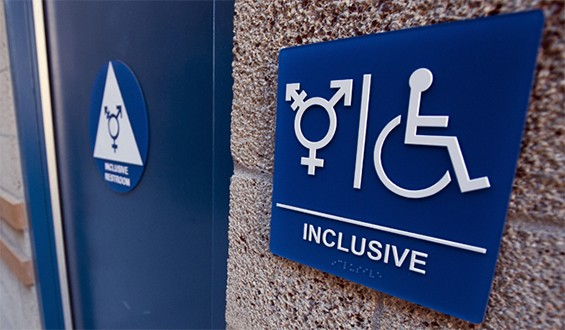 The Trump administration on Wednesday revoked Obama-era federal protections for transgender students that instructed public schools to allow them to use bathrooms and locker rooms matching their gender identities.

"This is an issue best solved at the state and local level," Education Secretary Betsy DeVos said. "Schools, communities and families can find — and in many cases have found — solutions that protect all students."

In a letter to the nation's schools, the Justice and Education departments said the earlier guidance "has given rise to significant litigation regarding school restrooms and locker rooms."

As a candidate, Trump told LGBT voters, "I will fight for you."

The policy reversal is a setback for civil rights groups, which had been urging Trump to keep the guidelines in place.

"The new federal policy sends the harmful and mean-spirited message to transgender students that they are not respected and valued in their schools, the very spaces where they should be safe and affirmed. School should be a place for learning and growing, not fear and being ostracized," said Brian C. Johnson, CEO of Equality Illinois, the state's largest LGBTQ civil rights organization.

Johnson noted that Illinois protections for lesbian, gay, bisexual, transgender and questioning (LGBTQ) people include the Human Rights Act against discrimination in public accommodations, employment, and housing, the anti-bullying statute, and the ban on conversion therapy.

"Illinois schools have a legal and a moral duty to support all students, including transgender students," Johnson said.

According to the Chicago Tribune, Chicago Public Schools (CPS) plans to keep in place the transgender policies they had previously adopted before the guidelines came down from the Obama administration. CPS allows transgender students to use the restrooms and locker rooms of their gender identity.

Transgender youth are more vulnerable to harassment and assault than their peers. According to the 2015 U.S. Trans Survey, 77% of students who are or perceived to be transgender report being mistreated in K-12 schools. That includes verbal harassment, harsher discipline than their peers, physical violence, and sexual assault.

Equality Illinois said this is a matter of affirming the civil rights of transgender students. Last July, 86 national civil rights organizations, including the Anti-Defamation League, MALDEF, NAACP, Human Rights Campaign, and National Women's Law Center, sent a letter to then-Secretary of Education John King in support of the old policy.