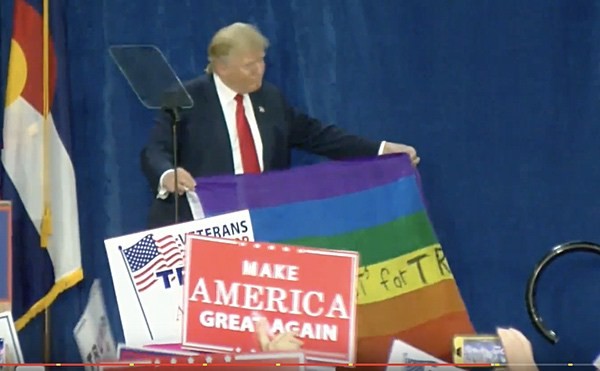 The White House announced Tuesday that President Donald Trump will continue to protect the rights of lesbian, gay, bisexual and transgender people working for federal contractors under an executive order signed by his predecessor President Barack Obama in 2014.

"President Donald J. Trump is determined to protect the rights of all Americans, including LGBTQ community. President Trump continues to be respectful and supportive of LGBTQ rights, just as he was throughout the election," a White House statement reads. "The president is proud to have been the first ever GOP nominee to mention the LGBTQ community in his nomination acceptance speech, pledging to protect the community from violence and oppression."

The decision to keep the 2014 executive order was Trump's, according to the statement, which appears to be in response to previous reports indicating the President was drafting an executive order to reverse the protections.

On Monday, the Human Rights Campaign (HRC), the nation's largest LGBT right advocate, issued a statement expressing concerns about such an order.

"The rumors of an anti-LGBTQ executive action by President Trump are deeply troubling," said JoDee Winterhof, HRC's senior vice president for policy and political affairs. "We already know that he is willing to target and marginalize at-risk communities for his perceived political gain. As the president and his team plan their next steps, we want to make one thing clear: we won't give one inch when it comes to defending equality, whether it is a full-on frontal assault or an attack under the guise of religion. Mike Pence should know that better than anyone given his track record in Indiana."

As governor of Indiana, Vice President Pence was forced to amend his controversial Religious Freedom Restoration Act that critics said would have allowed businesses to discriminate against the LGBT community.

Trump remains opposed to same-sex marriage and has surrounded himself with vocal opponents of LGBT rights, including attorney general nominee Jeff Sessions (R-Ala.) and health and human services nominee Rep. Tom Price (R-Ga.) His pick to fill the vacant seat on the Supreme Court will likely reopen the debate over same-sex marriage and transgender rights.