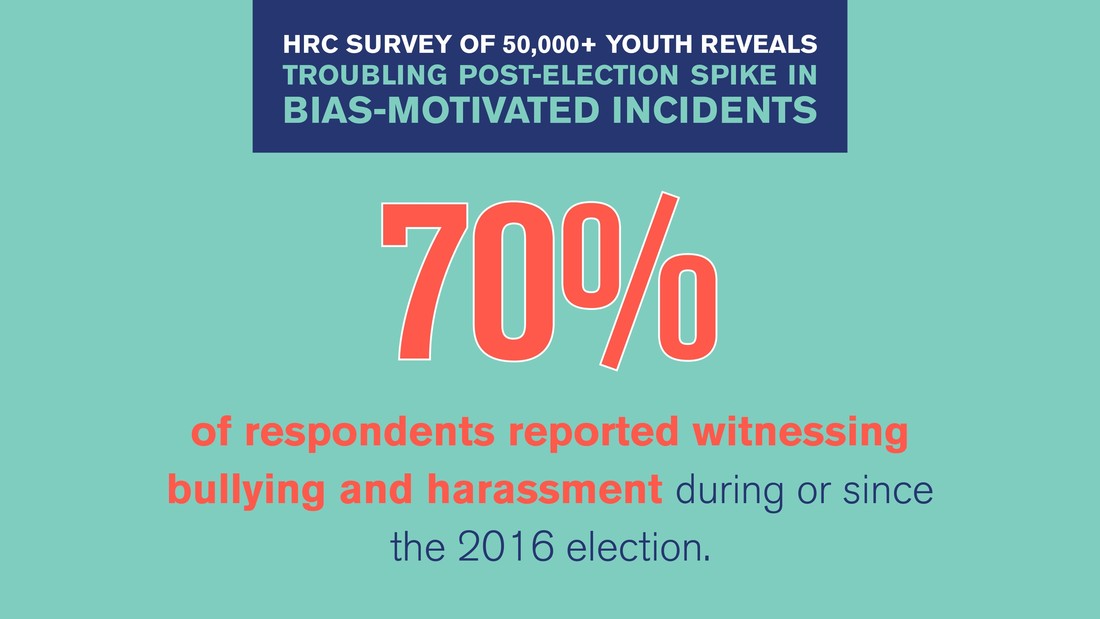 A presidential election marked by personal attacks and insults may have impacted even those too young to vote.

According to a new survey of more than 50,000 young people ages 13-18 of all different backgrounds conducted by the Human Rights Campaign, seven in ten students reported witnessing bullying, hate messages or harassment during or since the November election. Over 79% of those who saw such behavior said it happened more often after the start of the campaign.

Bias was a consistent theme of the bullying. 70% had witnessed incidents motivated by race or ethnicity, 63% by sexual orientation, 59% by immigration status and 55% by gender.

HRC officials called on politicians and adults to take responsibility and denounce violence and hate.

"Whether the threats come in their schools or from those holding the country's highest offices, no young person should be bullied or made to feel unsafe," said HRC President Chad Griffin. "The alarming results of this groundbreaking survey underscore our fears about the damaging effect the recent election is having on our nation's youth, and serve as a call to action to all of us committed to helping our young people thrive in an inclusive and supportive society."

One 18-year-old student from Illinois anonymously reported that some students cheered the election results: "People on my school's bus were talking badly about the LGBT community and black people, as well as a specific male identifying friend of mine who wore heels, calling him a 'tranny', a 'faggot', and 'nigger'. They also related it to the election, stating that Trump is going to help so that 'the faggots in the locker rooms can't be there to be pedophiles and stare at us'."

"Students in this country are living in heightened fear since the election. What does that say about us as a nation?"