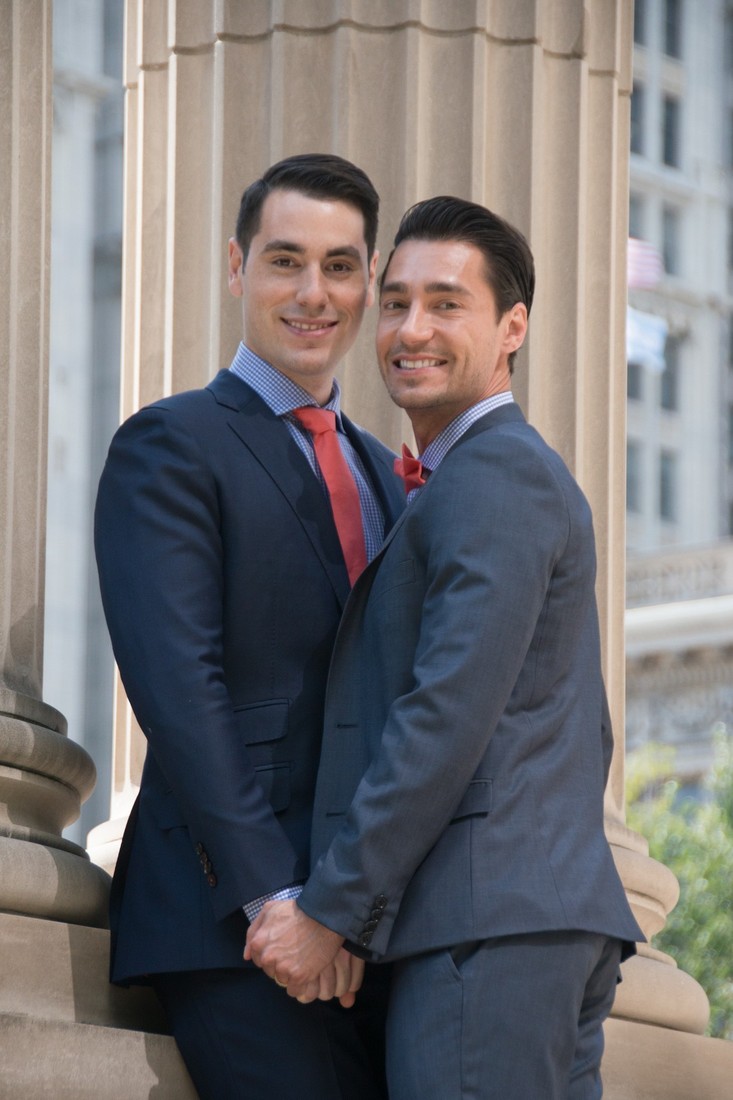 photo credit // charlie spinner
The journey to 10,000 same-sex marriage licenses in Cook County, which culminated this past summer, started with Charlie Spinner and David Ezra Spinner, the couple that claimed No. 1, leading to their marriage on Feb. 22, 2014.

But their journey almost never happened.

Charlie and David met at Minibar, in the heart of Chicago's Boystown neighborhood, but Charlie didn't make the greatest first impression. When he asked David out on a date, David said, No.

David had just gotten out of a relationship and was not ready to date. Plus, Charlie used a "dumb pick-up line," David said, laughing.

About six months later, Charlie spotted David online and asked how he was doing, and after some small talk, Charlie tried again – this time David agreed to the first date.

"I thought, if he was ballsy enough to ask me out twice, it was worth a shot," David said.

They met for dinner ...and the rest is history.

David was sick, yet Charlie kept saying he'd be fine, that he has a good immune system.

They had dinner at Kanok in Lakeview.

Charlie eventually proposed to David, and that too was dramatic.

"I proposed during a European vacation on the Pontes de Arts, the love-lock bridge in Paris," Charlie said. "I gave David a custom-engraved lock I created two months prior to the vacation. It said, 'My one, my only, my soulmate. Will you marry me?'

"I almost proposed at the wrong bridge because so many have locks on them, but luckily I found the right one."

An accordion played in the background when he proposed.

"Our legal wedding was the day after we unexpectedly got our marriage license," Charlie said. "Since we had already set a date before unexpectedly getting legally married, we had our ceremony on Dept. 19, 2014, in the West Loop at Room 1520."

Their unofficial honeymoon was in Seattle, they said. "To save money, we decided to visit one of our groomsmen in Seattle since Charlie had never been," David said. "Once we got to Seattle, we instantly fell in love with the beauty of the city and surrounding area, and decided we wanted to move there on the flight back home."

Their official honeymoon was over a year after their wedding – back in Europe. They went to Berlin, Prague, Bratislava, Vienna, Budapest, Llubjana, and Brussels. "We basically drank mulled wine and went to Christmas Markets the entire time," David said.

"It was amazing," Charlie added.

Both Charlie and David said they weren't determined to be, or gunning for, the No. 1 title. They just wanted to get their license on the first day possible as Charlie thought it certainly would be "romantic," he said.

"It was such an amazing day and we're so happy we got to be a part of Chicago history," said Charlie, who admitted that the two were "completely surprised" to receive the first same-sex marriage license in Cook County.

David added, "When we walked up and saw all the news crews at the clerk's office, we figured they had already interviewed the first couple to get their (license). It wasn't until we were in line and David Orr came out and told us that we were the first couple that we realized what had happened."

Cook County Clerk David Orr watched as Anthony Aranda, 50, and Terry Beauchamp, 49, signed their license and, in the process, scored a host of donated presents to the 10K couple, including a trip to Las Vegas.

Aranda and Beauchamp have been dating for 18 years and live in Chicago's Edgewater neighborhood. Aranda is a flight attendant for United Airlines, while Beauchamp manages a luggage store in downtown Chicago.

"The fact that Cook County is even counting and celebrating this achievement is amazing in itself. There are so many other places around the country that don't care about this achievement or see it as an issue, (thus), we feel extremely lucky to be a part of this history," Charlie said.

David added, "It's amazing that there are 10,000 couples that now have a chance to (see) their relationships be seen as equal, which wasn't possible before 2014," David said.

Charlie, now 27, is a media planner for Razorfish. He is originally from north suburban Palatine and lived in Chicago for eight years before moving to Seattle about 18 months ago. David, 33, is an account executive at Viant. He spent time as a child in Tinley Park, but is mainly from Chicago.

"We're loving Seattle and are excited about continuing to dig our roots into the West Coast. However, we both are in love with Europe and someday are planning on moving to either London, Paris, or Amsterdam," Charlie said.