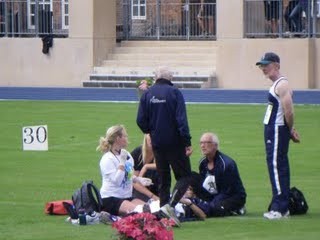 photo credit // samnkeithroadlesstraveled.blogspot.com
Copenhagen - The World Outgames in Copenhagen were disrupted Tuesday when four bombs exploded during a track event injuring at least one person according to International news reports.

The injured person, a runner, is said to have sustained minor injuries and will likely be able to compete. Police are reported to have detained a 31-year-old man possibly involved in the attack.

Sam Felker and Keith Little, a Nashville couple competing in the Outgames, blogged about today's incident.

"The camaraderie of the Outgames was temporarily broken this afternoon when unknown assailants tossed two explosive devices onto the track during the start of a relay," the men reported. "One runner who was in a starting position near the explosions sustained a minor injury to his hand and was treated at the scene by paramedics. The large crowd of athletes and spectators was stunned by what can only be described as a hate crime attack."

"We are all stunned by this turn of events," the men continued. "Locals tell us that Denmark, which is known world wide for its openness and diversity, has been plagued recently by increased hate crimes and violence aimed at gays and lesbians. Of course, we are also determined that this will not stop or spoil the Outgames."

"We condemn the violent attacks against LGBT athletes and spectators during the OutGames," the Federation of Gay Games, the organizers of the Gay Games, said in a statement released today. "We stand in solidarity with OutGames organizers and the very gay-friendly people of Copenhagen against this kind of violence."

The nine-day sporting and cultural event began Saturday in the Danish capital.