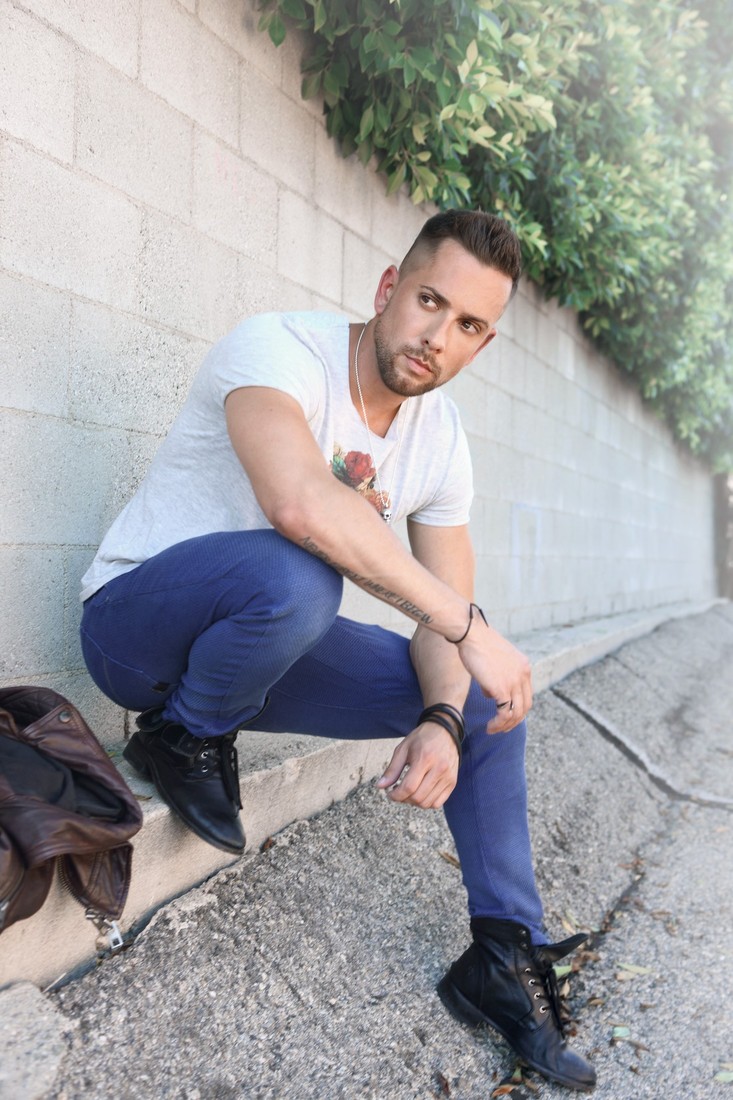 Los Angeles, CA - Life is Beautiful these days for David Hernandez, the 33-year-old singer who hit the mainstream through American Idol in 2008, though was embroiled in a semi-sex-scandal and ousted from the show before many anticipated.

But, on Tuesday, Aug. 16, he released his emotional song, "Beautiful," and on Friday, Aug. 19, he will present "Beautiful" and its music video at The Blind Dragon in Los Angeles.

He truly is proud.

"When I first heard 'Beautiful,' it was a song I could immediately relate to," Hernandez told GoPride.com. "Being someone who has struggled with self-esteem issues and insecurities, I felt like it honored all of our differences. When I listened to it for the first time, I immediately saw different races, religions, genders, ages, and sexual orientations together, celebrating each other and what made us all beautiful.

"We get caught up in what the media tells us is beautiful and forget that we come in all different shapes and sizes."

The video is very basic in comparison to some over-the-top, high-dollar videos, but very powerful.

"I wanted the message to be clear. I didn't want too much clutter or confusion or more than one solid story line," he said. "I think you get the concept 30 seconds in, which is great.

"There definitely is someone everybody can relate to in the video."

Hernandez has come a long way from his Idol fame – and infamy.

Hernandez, mind you, was on season 7 and all three judges loved his audition, punching his ticket to the Hollywood round – and praise for his performances continued. In fact, after performing "It's All Coming Back to Me Now" during the Top 16 week, Paula Abdul said Hernandez has one of the best vocals in the competition. Simon Cowell even said that Hernandez definitely secured his place in the finals with that performance.

Looking back, Hernandez said the overall Idol experience was "one of the wildest, but best rides of my life ...It gave me a major platform that catapulted my career in a way I never could have imagined."

Hernandez has been making music for a living and touring for eight years, which he admitted "is a blessing."

Hernandez said the 'revelation' at the time that he had danced at a gay club was not major to him. "I have always been upfront and honest about my previous profession," he said.

But, he added, "The way the nightclub chose to sell my story out while I was having one of the biggest moments of my career was disgusting."

He continued, "At the end of the day, I held my head high because that's how I was raised. Things worked out in the end and I do believe karma holds people accountable. I, however, made peace with it years ago.

"It was a different world 10 years ago. We have come a long way since I was on the show. Being gay isn't as taboo, although we (still) have a lot of work to do and being a stripper certainly doesn't carry the negative reputation it used to. It affected me emotionally for sure, being exposed on national television the way I was.

"I was publicly shamed for being me. At (age) 24, that would hit anyone hard. 'Idol' knew about my past, so I know they (would) not kick me off the show. I think what it came down to was, the lack of votes from a judgmental audience. But like I said, things have dramatically changed in a decade."

And yes, Hernandez is openly gay. When asked if he's single or dating now, Hernandez replied, "There is someone I am seeing. I won't mention a name, but things are going well and I am in a really good place."

Hernandez, now 33, is living in Los Angeles. He has long been out to his family and friends, yet just recently he came out publically.

"I have always had young LGBTQ fans message me, (saying) I was an inspiration and how much they loved my voice. A lot of them would share their struggles with me and many of them touched my heart," Hernandez said. "I don't think at the time I was inclined to share my story with them because of the mental shackles I had in my mind. I was terrified because of the industry and the labels/management's opinions. I was told that being an out artist would be the end of my career and I am (still) told that today ...surprisingly, even by members of the gay community.

"I felt like it was my duty to let the youth know that you can be exactly who you are and still be successful. You don't have to hide in the shadows for fear that you won't be accepted or have less opportunities. I wanted to lead by example."

Hernandez said the content and sound of his music has changed over the years as he's gotten older. "Also, I realized after I was burned several times (that) I also am a businessman and need to take the reins of my career. I have a say in every aspect now, from my appearances to release dates of anything that has my name on it."

Enjoys working out – "not just for my body image, but also (because) it clears my mind."

He performed PrideFest Milwaukee and Northalsted Market Days in 2015.