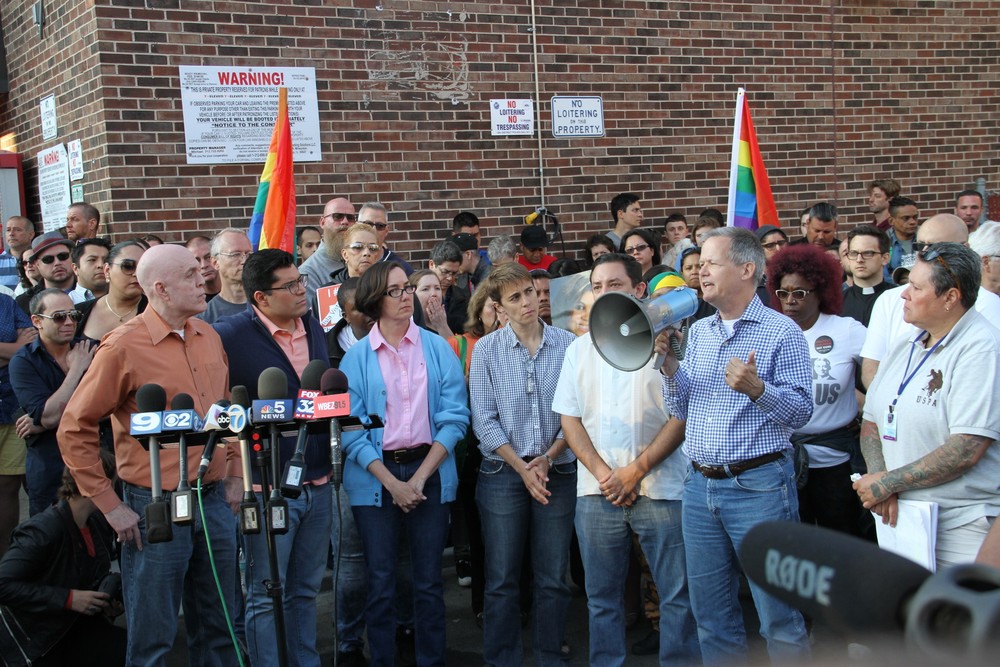 Sidetrack co-owner Art Johnston and others reflect on the terror at Pulse Nightclub, its impact locally and nationally

Chicago, IL - Art Johnston doesn't hold back – his thoughts or emotions – when talking about the attack on Pulse Nightclub in Orlando, Fla., on June 12, which was the deadliest mass shooting in U.S. history.

Johnston, the co-owner of Sidetrack in Chicago's Boystown neighborhood, said the attack which killed about 50 – including the shooter, Omar Mateen, 29, an American citizen who was living in Florida – and injured 53 was "a horrible act that we will remember, forever."

Johnston added, "This (attack) strikes at the heart of our community."

Johnston and his longtime partner, Jose "Pepe" Pena, were in Brooklyn, N.Y. over the weekend and had returned to their hotel room after a wedding. At about 2:30 a.m. ET, which was 30 minutes after the attack started, they learned of the tragedy unfolding in Florida. They watched national TV coverage for the rest of the night, into the morning, and they "got more hurt and angrier as the night went on," he said.

"This was something you don't know how to take in, except to know that we are, again, or still, a community under attack."

Teary-eyed, Johnston admitted he struggled to "put it in any kind of perspective" the tally of dead and injured. He simply said, "My heart goes out to the loved ones, the family members injured and assassinated."

Sidetrack celebrates its 34th anniversary party on June 16, and the upcoming event will no doubt be a time for Chicagoans to further mourn the Orlando tragedy. After all, the Orlando attack "strikes at the heart of our community" – bars, which have long been a safe haven for all in the LGBT community. A rainbow-colored sign near the entrance to Sidetrack now has black draping around it.

Johnston confirmed that Sidetrack immediately added more security to its already-high number of security officials. "And I'm sure other gay places will do the same," he said.

He said that Sidetrack will further and immediately examine all of its procedures, including for a potential emergency, to see if anything needs to be revised.

When asked if Sidetrack needs now to have policemen, in uniform, at the bar during all hours that the bar is open, particularly since Sidetrack is the biggest, most well-known gay bar in Chicago and, arguably, in the nation, Johnston said, "that is a topic we are considering."

Johnston said he and the management staff are weighing whether in-uniform police will make customers feel safer or more uncomfortable.

"I just hope that we, as a community, reach down into that deep reservoir of strength that got us through all of our previous crises, and that we continue to come together, and protect and defend each other," said Johnston, whose life, perhaps more than anyone in Chicago's LGBT community, has been filled with so many highs, and sadly so many lows, too.

Johnston was among about 300 who, on Sunday night, converged in the parking lot of the 7-Eleven in Boystown for a vigil to honor those killed and wounded in Orlando. Johnston was joined by local leaders, activists, politicians and countless Chicagoans for a teary, emotional rally. The 30-minute vigil was organized by Chicago Survivors and the Chicago-based Gay Liberation Network, and the speakers included Chicago Police Supt. Eddie Johnson.

"We're here to support not only Orlando, but to support the community here, and to let you know we'll always be here for you," Johnson said. "As a result of the incident today, I have stepped up patrols in and around this community, as well as the special events going on across the city."

Johnson was one of several speakers who pushed a love-all message, not to focus on the shooter's motive, to help heal a city and a country.

Rev. James Wilkowski, who was at the same spot in Boystown in 1998 for a vigil in memory of Matthew Sheperd, griped the crowd when he asked for a rainbow flag, then held it high in the air.

"This flag tells us that we are here because of God's love. Let this be a symbol of our mutual commitment to the entire community, and to the nation," Wilkowski said.

Chicagoan David Sotomayor, a performer and make-up artists who also is known as Jade Sotomayor, was one of the most emotional moments in the vigil – when he told that he lost his cousin, Eddie, 34, in the Orlando shooting.

"I'm pretty sad tonight, and overwhelmed, and happy to know that there is a community out there that cares about all this tragedy that happens," Sotomayor said. "I cannot even understand why this would happen—this man was amazing. He treated all of us so well. Anything you did, he had a smile on his face. I haven't met one person who has ever, ever said they would be upset with him. This morning I woke up to find out that though fans of mine that my cousin had passed in this shooting."

The speakers were flanked by families whose children have fallen victim to gun violence in Chicago.

A second rally was held concurrently in Andersonville, where Midsommarfest was held.

Colleen Daley of the Illinois Council Against Handgun Violence spoke at the Boystown vigil, as did Eboo Patel, president of Interfaith Youth Core, a nonprofit promoting interfaith cooperation and dialogue. In addition, Andy Thayer addressed the attendees.

The Center on Halsted, 3656 N. Halsted St., will hold a vigil Monday night.

A candlelight vigil, with posters, flowers and more in support of Orlando, carried on well into the night at the northeast corner of Halsted and Roscoe Streets.

Praying for a friend

Bryan Nolte had a friend in Orlando who was celebrating his 25th birthday. They were talking via Skype at about midnight, and about three hours later, Nolte learned that his friend had been shot in the leg at Pulse Nightclub – and was in stable condition.

"Right now, I'm looking for comfort in the (Chicago gay) community, which I've called my home for the past five years, specifically among LGBT Muslims and non-Muslims, just for understanding and solace."

Nolte, 22, lives in Andersonville, is openly gay and was among hundreds of teary-eyed attendees at the Boystown vigil. Nolte chose not to mention his friend's name, but said the two have been friends for three years and are former classmates at DePaul University.

"I was only 5 years-old during the 9/11 attacks, so I didn't really know then what the word terrorist meant. (But) I do now. Same for the words, hate and targeted," Nolte said.

Nolte said he was surprised, yet thrilled, by the number of attendees at the Boystown vigil.