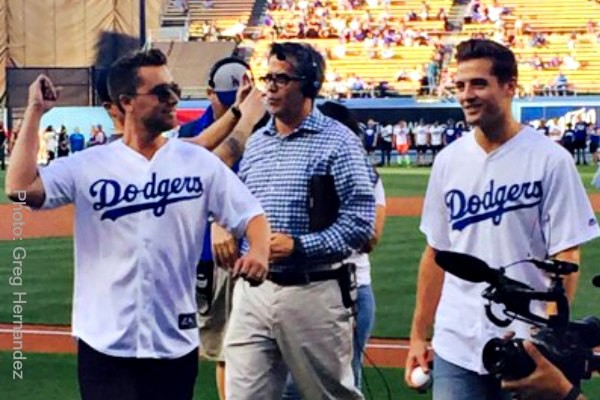 Los Angeles, CA - Out athletes Robbie Rogers and Esera Tuaolo were among the celebrities who participated in the Los Angeles Dodgers' fourth annual LGBT Pride Night.

"These venues and events are really important and amazing," Rogers told Greg In Hollywood's Greg Hernandez. "There's a lot of kids out there who think there's not a path for them in sports."

Tuaolo, who announced in 2002 that he's gay on HBO's Real Sports after retiring from a 9-year career in the NFL, performed the national anthem.

Also attending the event were singer Lance Bass and actor Noah Galvin, who plays a gay student on ABC's The Real O'Neals.

"I think it's so important just to be visible as part of the LGBT community," Bass said. "You don't really change people's minds until they get to know you. So it's so important for nights like this to happen."

"You're rubbing elbows with people who might not even know a gay person. It keeps us visible and shows that we're all the same and we all love sports on a night like this and it's nice to all be one," he added.