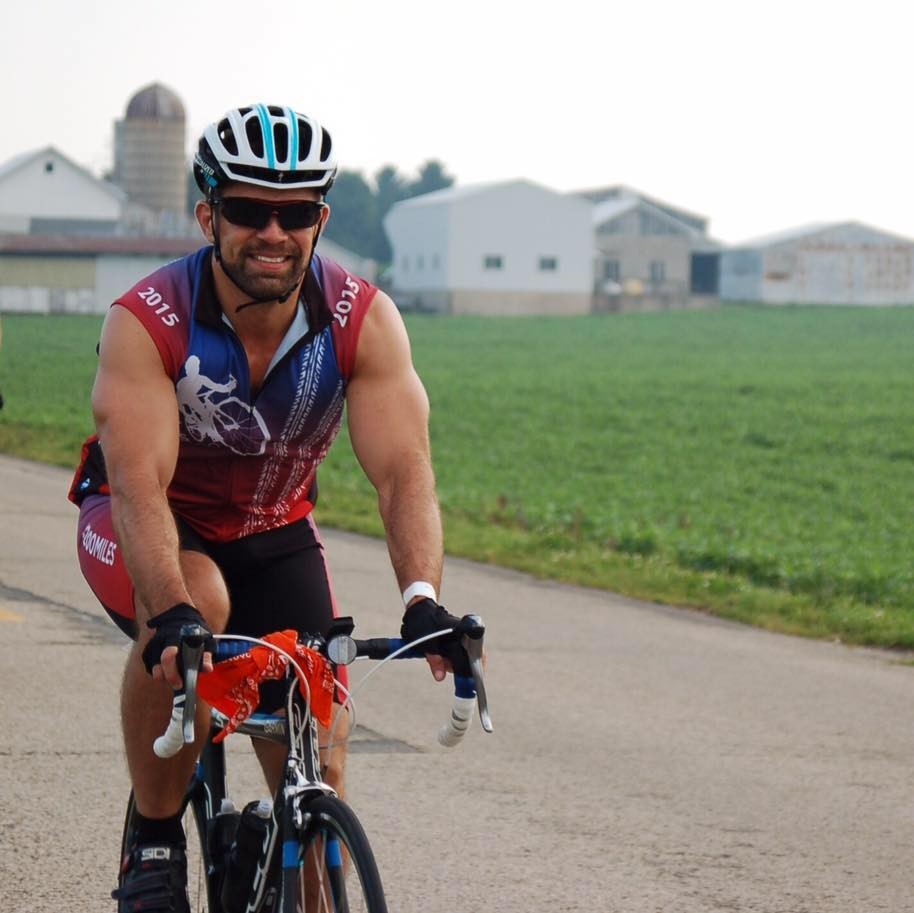 Several fundraisers to support Ride are scheduled, including “View From The Top” of Halsted Street in Boystown

Chicago, IL - There's a moment during the Closing Ceremony of the annual Ride For AIDS Chicago that hits hard. Tears flow, emotions are on overload as some of the cyclists join with select members of the crew, and this small group leads a bicycle through the crowd to the front of a stage.

The rider-less bicycle represents those who have lost their battle with HIV/AIDS, and those in the process are HIV-positive.

Almost everyone is crying at that moment.

"My personal and professional commitments to the community and my love of cycling brought me to the Ride years ago," said Mark Franklin, 47, who lives in suburban Naperville and will be participating in the Ride for the fifth time this summer. "Unexpectedly, it was the spirit and experience of the Ride and the people I met along the way that helped me overcome the shame and stigma related to my own HIV diagnosis.

"I was dedicated to fight HIV and AIDS, had fundraised for the Ride for months, and had pedaled 200 miles over two days, yet remained silent to all but a few individuals in my life about my own status. It was not until I witnessed the Ride's Closing Ceremony that I realized the fear and power that the stigma of HIV held over me. At the ceremony, I watched other riders and crew step forward to acknowledge publicly their own HIV-positive status. It was powerful and moving. By the end of the ceremony, I was forever changed, determined to prevail over the stigma, and knew I could begin to openly state ... I am HIV-positive."

The 13th annual Ride For AIDS Chicago is July 9-10, bringing together those living with HIV, LGBT advocates, amateur cyclists, and endurance athletes to raise funds for HIV services and more. The Ride is the Midwest's only back-to-back century ride, and this year there also is a 100-mile option.

Franklin is a pharmacist at Advocate Illinois Masonic Medical Center, co-captain of Team TPAN for the Ride and a Ride executive committee member. He will be joined on the Ride this summer by hundreds of other riders and devoted crew members. Cyclists are required to fundraise at least $1,000.

"I continue to ride because there is still a long way to go to overcome the shame and stigma of HIV and AIDS in our communities and vital funds are needed in the fight against HIV," Franklin said. "The Ride empowers everyone living with, or at risk for, HIV/AIDS to live open, healthy, and productive lives – to reduce the debilitating effects of shame and stigma associated with HIV and AIDS, all while raising money for education, prevention, and support programs for HIV-positive and at-risk residents of Chicagoland."

Franklin's Team TPAN is joining forces with Team Shaine for one of the most exciting – and certainly a great-looking – fundraisers for the Ride. The "View From The Top" Sunday Funday Fundraiser for the 2016 Ride for AIDS Chicago is June 5 in Boystown. Married Chicago couple Dan Tran and Mike Raffety are hosting the event.

More than 200 are expected.

Chicago-based DJ Jesse Mercado will blast his musical set from the rooftop, which overlooks Boystown close to Hydrate on the west side of Halsted Street. There will be plenty of cocktails, appetizers, and go-go boys. Plus, there will be raffle prizes and silent auction items, plus a professional photographer capturing the moments. The MC for the event, Sean Kotwa from LKH Management, will be making his drag debut. And, Gary Nelson will be speaking at the event about the Ride and TPAN.

Organizers are hoping to raise more than $5,000 at the rooftop fundraiser.

"Money raised at this event will go to TPAN to ensure education, prevention, and support programs are available, at no cost, to Chicagoland's HIV-positive and at-risk residents," Franklin said. "The 2016 Ride benefits TPAN, About Face Theatre, AIDS Foundation of Chicago, Center on Halsted, Chicago House, Howard Brown Health, and Fred Says."

Franklin added, "We are appreciative of our dear friends Dan Tran and Mike Raffety for their ongoing commitment to the community, support of the Ride, and opening their home and rooftop decks at the Halsted Hot Tub for this fundraising event. Two beautiful decks above the heart of Boystown, overlooking Halsted Street with a spectacular view of both Lakeview and downtown Chicago. (It is) a perfect location, (a) wonderful space to come together in fellowship as a community, to raise awareness for HIV and AIDS, and to raise vital funds for clients and community partners of TPAN."

Over its 12-year run, the Ride for AIDS Chicago has raised more than $4 million.

Tickets for the "View From The Top" fundraiser are available for purchase at https://gopride.com/Zcey/ and the event is expected to sell out.

Donations to Franklin's fundraising can be made at: https://gopride.com/Zcez.

Another Ride For AIDS Chicago fundraiser is schedule for Saturday, June 4, from 2-6 p.m., at The Breakers, located at 1200 W. Sherwin Ave., in Chicago. Tickets are $50 per person and include food and drink. The event is a benefit for Team Center on Halsted and hosted by James Walker. Tickets are available at: https://gopride.com/Zcf0/

Team Fred is holding a three-hour Karaoke Night fundraiser on Saturday, June 4, starting at 8:30 p.m., at Shakers on Clark, located at 3160 N. Clark St., in Chicago. The event will feature raffle prizes and a $30 open bar. Donations to Team Fred can be made at: https://gopride.com/Zcf1