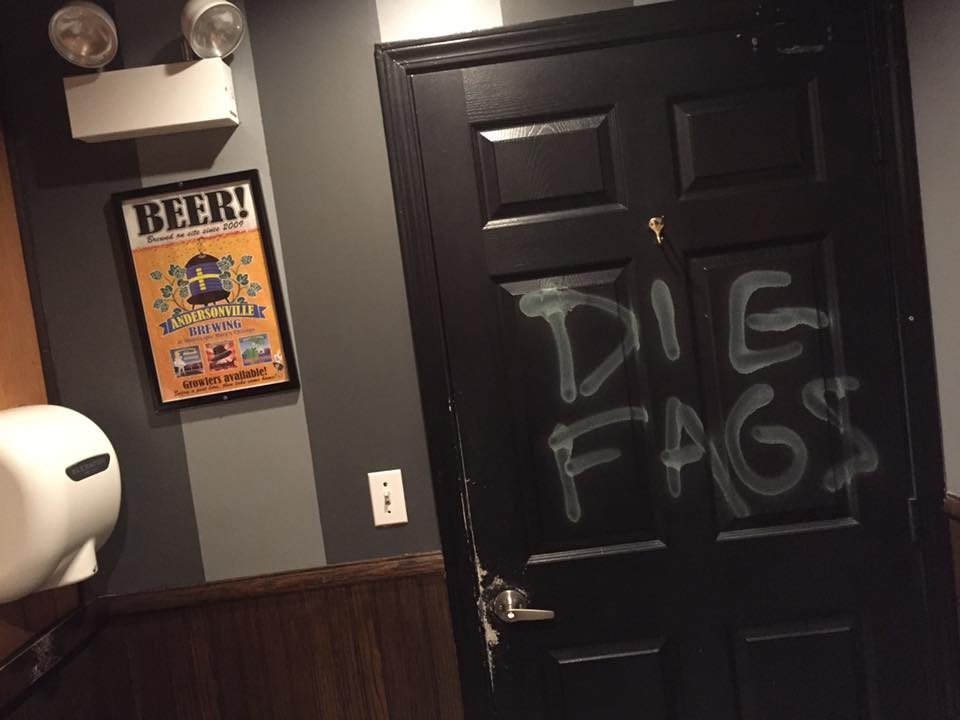 Chicago, IL - Hamburger Mary's in Andersonville was vandalized with anti-gay graffiti over the weekend.

On Saturday, an employee found "Die Fags" painted on the inside of one of the two single occupancy bathrooms in the Andersonville Brewing side of the popular restaurant at 5400 N. Clark.

The damaged door has since been repainted in multiple colors to "celebrate diversity," Ashley Wright told ChicagoPride.com.

Ashley and his twin brother Brandon Wright are co-owners of Hamburger Mary's International, the 13-restaurant chain of LGBT-friendly family restaurants featured on the May 15 episode of "Undercover Boss."

"I'm not sure if there's a correlation," Ashley said of their recent appearance on the CBS reality show. "Maybe there is, maybe not. I was just thinking the timing was interesting. We've had a lot of publicity because of the show. Most has been positive, but there have been negative comments as well."

Chicago police are investigating and Wright told ChicagoPride.com that detectives will review surveillance video from the restaurant on Monday. He believes the video shows the alleged suspect.

The Wrights, who live in Andersonville, opened the North Clark location in 2006 and this is the first time they've experienced an anti-gay incident in the LGBT-friendly neighborhood.

"We've been in a real high since the show. Then all of a sudden, were slapped with some ugly reality," said Wright.

Update: The restaurant has added the word "Love" to the door. "Love conquers hate, always," the the owners posted on Facebook.