Spinning His Dream: DJ Jesse Mercado is a regular on the Chicago music scene 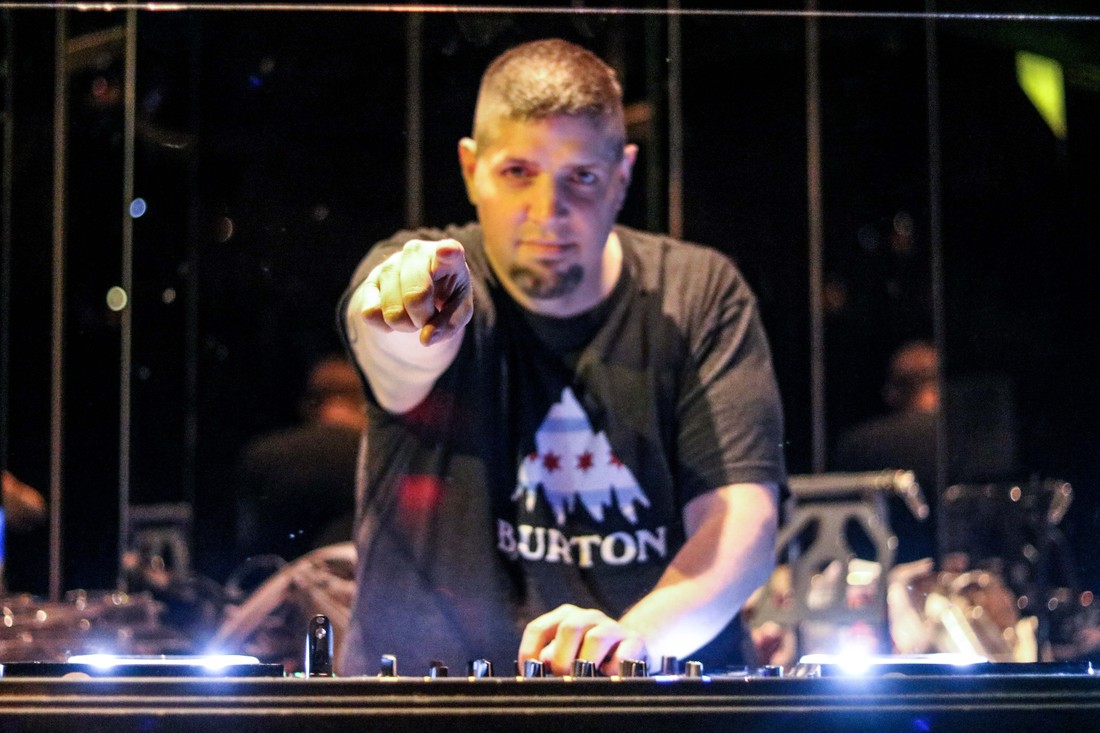 Jesse Mercado grew up in Crystal Lake and Cary, in the far Northwest suburbs, but he fell in love with Chicago as a kid and knew it was where he wanted to live – and he's been a fan of local dance music since the late-1980s, when he used to sneak into Chicago on Sunday nights to attend the B96 dance parties at the Riviera Theater.

It was Steve "Silk" Hurley who inspired Mercado to be a DJ.

In 2005, Mercado watched Hurley spin one of the "DJ's In The Park" events hosted by the Chicago Park District, "and he moved the crowd unlike anything I have ever seen," Mercado said. "The crowd erupted into a frenzy every time he introduced a new track; it was magical.

In 2007, Mercado started learning the craft, and has since worked at multiple venues in Chicago as well as clubs in Dallas, New York, Kansas City, St Louis, Toronto, and elsewhere.

Jesse Mercado is now DJ Jesse Mercado, a fixture on the gay scene, known for his tribal/vocal house style. He has been spinning at Hydrate Nightclub in Boystown for more than three years and has been an official resident since January, 2015. Mercado spins at Hydrate six times a year, with his next stop at Hydrate is on April 29. Plus, he's been a resident DJ at Steamworks for the last five years, spinning at the bath house on the fourth Saturday of each month for its Bears, Bath and Beyond event.

"As a DJ (for gay venues), it's very rewarding," Mercado said. "Everyone on the dance floor faces one another and feeds off of the energy of the music as well as each other, which allows me to take the crowd on a journey over the course of several hours. I can play very high energy music and have them working up a sweat, then take them down a darker sexier path and watch sexual tensions rise. It's really fun to orchestrate and something that is very unique to the gay community.

"When I DJ a daytime event, the vibe is more carefree with lots of tracks that people can sing with and throw their hands up in the air. When it's a club event or something like Steamworks, it's a sexier tribal or tech house sound with less vocals and hard driving beats."

Mercado, 44, lives in Edgewater and, by day, is an operations analyst for a financial services firm in downtown Chicago. Being a DJ is his passion. He's been with his partner, Clinton, for the last six years and they've been engaged for the last two. They're planning a destination wedding in 2017, but still trying to decide the right location.

Mercado said the best part of being a DJ is simply, "Bringing joy into people's lives."

Take, for instance, his first gig at the old Vision Nightclub in 2010. "I played a fantastic remix of Journey's 'Don't Stop Believing' for my best friend and it literally brought him to tears. Someone captured the moment on video and it was truly amazing, but my friend made me promise to never post it online. Maybe one day I'll convince him to let me put it on Facebook."

Mercado said being a DJ lets him meet people from all around the world who also share a passion for dance music.

The worst part of being a DJ, he said, is, "Not being able to be on the dance floor (with) the rest of the crowd."

And, quite often, "the DJ booth is the loneliest place," he said.

Mercado said technological advancements have made the entry into the DJ community much easier, which means he has to work harder than ever to maintain his status. "Over the last year or two I've started working with production software to create my own mash-ups and give my live sets a flavor that is unique to me," he said. "I can easily spend an entire Saturday working on a mashup just to make sure it's absolutely perfect when I play it in a club."

Mercado said his all-time favorite DJ gig was the first time he spun at Hydrate Nightclub in 2012. After all, he had been dancing at Hydrate since it opened. "Once I decided to become a DJ, the first big goal I set for myself was to land a gig (at Hydrate)," he said. "I've been fortunate enough to turn that gig into a residency and almost four years later it's still my favorite place to spin."

Mercado's music often incorporates the sounds of Rihanna, Ellie Goulding, The Weekend, Pink Floyd and Amy Winehouse. "I don't intentionally exclude any artists from my live sets or podcasts," he said. "There are artists whose original work I don't care for, but, I'll play their tracks if there is a great remix that works with my sound and gets a positive crowd response."

Case in point, Paris Hilton's original work. He personally doesn't care for it, "but there is a great remix of her 'High Off My Love' track from this Brazilian producer that gets a good response each time it's played." Mercado said.

Last May, Mercado decided to live a healthier lifestyle after being diagnosed with Type-2 Diabetes – and he has since lost 120 pounds through a combination of diet and exercise. "It has been an amazing journey so far; I feel like I'm 15 years younger than I did one year ago," he said. "My ultimate goal isn't focused on reaching a specific number with regards to my weight. (Rather), it's about being able to life to its fullest and doing more of the things that make me happy, like snowboarding and DJing. The great thing about this journey is I have more energy in the DJ booth, which definitely carries over into my live sets."

When asked for advice for those looking to lose serious weight, Mercado said. "Eat a source of protein within 30 minutes of waking up and eat something every two to three hours up to and including dinner. Doing both of these will help speed up your metabolism and increase weight loss. I also suggest that people eat something healthy when having a cheat meal as a way to minimize the damage. When I go out to eat and have a big cheeseburger, I have a salad or a side of broccoli in place of the fries or tater-tots."

Growing up gay in the Northwest suburbs in the 1980s "wasn't always easy," he said, "so I escaped to the north side (of Chicago) as soon as I could afford it. Twenty-two years later I still love living in Chicago and couldn't imagine living anywhere else."

One of the ways Mercado gives back to the gay community is by volunteering his DJ services for charity events. For instance, he's working with a member of Team TPAN to throw a tea dance to raise money for the 2016 Ride For AIDS Chicago.