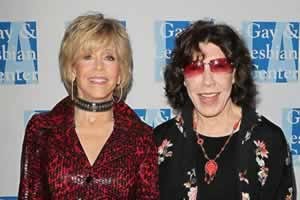 In an interview with gay glossy Out, Lilly Tomlin and Jane Fonda were asked about their big gay followings.

The women star in the Netflix comedy Grace and Frankie. Season one of the series arrived on DVD this week. Season two is just weeks away and a third season is in development.

"When did you realize you had such a big gay following?" they were asked.

"Oh, I knew that from the beginning," Tomlin, who is openly gay, answered. "I got famous literally in 1970. I mean it was '69 but it was the last Monday in '69, so I always say 1970. If you say the '60s, it sounds like I was around for a while and I wasn't. And I always had an act and now I was able to sell tickets because I was on Laugh-In. And I knew because I saw it in my audience. I never expected not to have a big gay audience. Gay audiences are usually ahead of the curve."

Fonda said that it only came to her attention about a decade ago.

"When I wrote my memoirs, which I think was in 2005, I thought that my audience would be women," Fonda said. "But I got a lot of mail from gay guys who described loving my books. That was the first time I thought, Oh that's interesting. The way I wrote my book, I viewed the journey of my life through a gender lens and wrote a lot about how patriarchal society makes women feel they have to be a certain way. You know, if you're not perfect, if you're not beautiful, if you're not skinny, you can't be too smart, you can't be angry, you want to be loved. And what I discovered from the letters I got, from gay men in particular, was that they go through the same thing. The demands are you know, you're not macho enough, you're not butch enough, you're not man enough, so you're not a real man. The patriarchal society uses homophobia just like sexism and it damages people the same way."