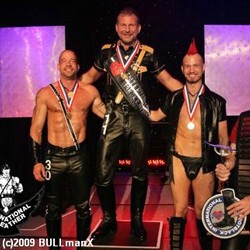 winner jeffrey payne with the first and second runner-up

Payne bested a field of over 50 contestants, from around the globe. Participants were judged on stage presence and personality (Pecs and Personality), leather image, presentation skills, and physical appearance.

In addition to the International Mr. Leather 2009 title, Payne received a prize package consisting of donations from businesses and organizations supporting the leather community.

This year's competition was held at the Chicago Hilton, 720 S. Michigan. The hotel hosted the entire IML weekend.

IML began in 1979 when about 400 gay leathermen gathered in Chicago. Today, the event has grown to be an annual tradition for the leather community drawing contestants and thousands of attendees to the Windy City over Memorial Day Weekend. Once an event for "hardcore" leathermen, IML has expanded in recent years to include a more diverse crowd from the experience to the curious.

Last year's event drew more than 15,000 leatherfolk from around the globe.