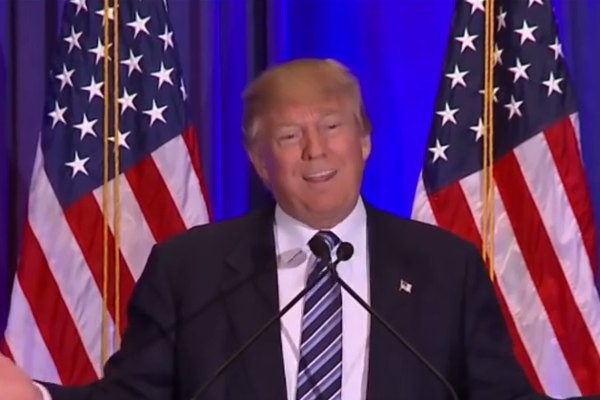 Republican presidential candidate Donald Trump on Saturday refused to answer a reporter's question on marriage equality, telling him repeatedly to sit down.

At a press conference in West Palm Beach, Florida, the DailyMail.com asked Trump about his stance on marriage equality.

"We have a policy on it. And I've said it very, very strongly," he responded without elaborating on the policy.

"And I think you know it. And it's all done and, you know, in a campaign how many times do I have to say it?"

While Trump has never said that he supports marriage rights for gay couples, his initial response to the Supreme Court's June finding that gay couples have a constitutional right to marry was to accept it.

"Anybody that's making that an issue is doing it for political reasons," Trump told The Hollywood Reporter. "The Supreme Court ruled on it."

During an appearing on MSNBC's Morning Joe, Trump said that the "decision's been made, and that is the law of the land."

Recently, however, Trump has said that he "would strongly consider" appointing justices opposed to the ruling.

At Saturday's press conference, Trump responded that "we're not here for discussing that. But everybody knows how I feel on it." When pressed on the issue, he ordered the reporter to "sit down."