Rachel Maddow: 'As a gay person In 1992, I didn't feel like Bill Clinton had my back' 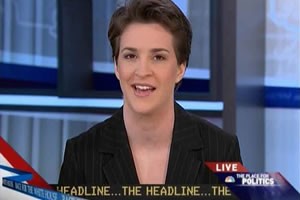 In his victory speech Tuesday, Sanders reiterated his support for LGBT rights.

"We must pursue the fight for women's rights, for gay rights, for disability rights," Sanders said. "We must against stronger and stronger opposition protect the right of a woman to control her own body."

Sanders said that voters in New Hampshire had confirmed "the beginning of a political revolution."

"We will all come together to say loudly and clearly that the government of our great nation belongs to all of us, not just a few wealthy campaign contributors. That is what this campaign is about, that is what the political revolution is about," Sanders said.

Maddow said the notion that the media was liberal just wasn't true.

"I look at all the young people, particularly at this Bernie Sanders event. I was 19 in 1992 when Bill Clinton was running on the Democratic side. And at the 1992 Republican convention, Pat Buchanan got up there and gave this culture war speech where he basically declared a crusade against minorities and particularly gay people. And as a gay person watching that in 1992 I didn't feel like Bill Clinton had my back. I didn't feel like the Democratic party had my back," Maddow told viewers.

"He was talking about agreeing with Ronald Reagan that government was the problem and all this stuff. If you are a liberal, you are not in the majority in this country and you know it and it always feels that way."

"But this Democratic race with Hillary Clinton and Bernie Sanders campaigning this way against each other, that happened because Bernie Sanders got into this race and all these kids who are enthused about this race, whether or not they're supporting Bernie Sanders directly, are never going to feel like mainstream politics isn't about them," she adde