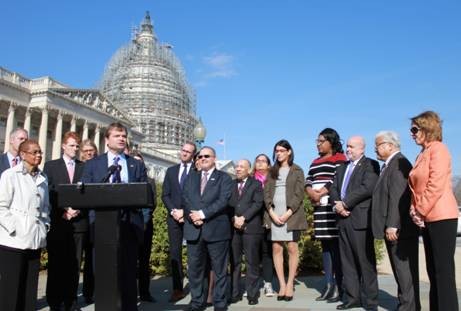 Washington, DC - Today, U.S. Representative Mike Quigley (D-IL-05), Vice-Chair of the Equality Caucus, joined a group of Democratic colleagues to announce the formation of the Transgender Equality Task Force. The Task Force will analyze current barriers to full legal and societal equality for transgender people, and will develop legislation and other initiatives to ensure the transgender community has equal access to the American Dream.

"This past year has been an amazing one for progress, but we can't stop now. Despite the recent gains in legal and social recognition at the federal and state levels, transgender Americans remain extremely vulnerable to harassment and violence," said Rep. Quigley. "I'm hopeful that with this new voice in Washington, the Transgender Equality Task Force can start to move the needle on this issue because the status quo of violence and poverty in the transgender community is unacceptable."

Following the announcement, Rep. Quigley participated in a congressional forum on transgender violence with leaders on the issue from Transgender People of Color Coalition, National Center for Transgender Equality, Human Rights Campaign, National Black Justice Coalition, and Center for American Progress. The panel represented the voices of organizations dedicated to the eradication of bias motivated violence against transgender people. The witnesses described the work their organizations are doing on a policy level and recommended ways Congress can act to end the epidemic of violence.

"Today's forum on violence against transgender people was truly eye opening. It is crucially important that lawmakers are equipped with data and statistics that help quantify the challenges that transgender Americans deals with – violence, homelessness, housing, unemployment – as a first step to developing real world, practical policy solutions. And today's conversation with the leading voices for transgender Americans was helpful in that effort," said Rep. Quigley. "I look forward to future conversations through my role on the Transgender Equality Task Force and ensuring equality for all Americans."

Since his election to Congress in 2009, Rep. Quigley has been a tireless advocate for the LGBT community. At the start of the 114th Congress, Rep. Quigley was named a Vice-Chair of the Congressional LGBT Equality Caucus. He has hosted numerous Equality Caucus briefings around the "economics of equality," which explore economic equality in the LGBT community and how Congress can better address this critical issue. In January 2015, he became an original cosponsor of the International Human Rights Defense Act. Previously, he called on Illinois state legislators to pass marriage equality and celebrated when that day came. He is a co-sponsor of the original Respect for Marriage Act of 2009, and has lent his support to the national NOH8 Campaign, a global visual art protest against legislation banning gay marriage. Prior to the Supreme Court overturning the Defense of Marriage Act (DOMA) in 2013, Rep. Quigley was a critical opponent of the law and hosted a DOMA field forum to investigate the negative impacts of the law on individuals and families in Chicago. In the fall of 2009, Rep. Quigley was inducted into the Chicago Gay and Lesbian Hall of Fame for his work as a Cook County Commissioner to extend benefits to LGBT employees.

The Congressional LGBT Equality Caucus was established in the U.S. House of Representatives in June 2008 by Co-Chairs Tammy Baldwin (D-WI) and Barney Frank (D-MA), along with Members of Congress who were strongly committed to achieving the full enjoyment of human rights for LGBT people in the United States and around the world. The Caucus serves as a resource for Members of Congress and their staff and works toward the extension of equal rights, the repeal of discriminatory laws, the elimination of hate-motivated violence, and the improved health and well-being for all regardless of sexual orientation or gender identity and expression.