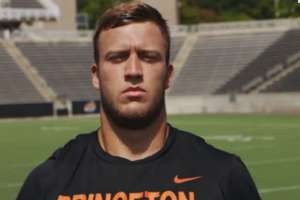 Darrow discussed coming out to his teammates and coaches in an Outsports.com story.

"People will surprise you," Darrow said. "I was definitely concerned that people, teammates, would react poorly. I think in this day and age people really just don't care about it. It's really not a big deal anymore."

Darrow is currently the only openly gay player in major college football.

Michael Sam announced he's gay after leaving the University of Missouri, while Arizona State offensive lineman Chip Sarafin was open about his sexuality during his final season with the Sun Devils.

Darrow said that he "felt trapped" but hesitated coming out because he thought "there would be a lot of animosity."

"There are a lot of guys from the South on the team. I wasn't sure how people would react to it," he said.

If coming out "is going to help some sophomore in Arizona come out to his teammates and be comfortable in himself, that's the reason I'm doing it," he added.

"I think if you ask anybody on the team, they'll tell you he's a terrific teammate," Tigers football coach Bob Surface said of Darrow.