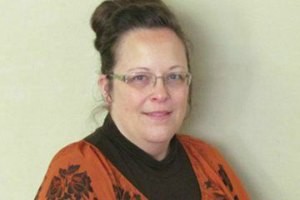 Kentucky clerk Kim Davis has appealed a federal judge's decision that found her in contempt for ignoring his ruling ordering her to issue marriage licenses to all qualified couples.

Davis, the elected clerk of Rowan County, stopped issuing marriage licenses altogether after the Supreme Court struck down gay marriage bans in all 50 states. She has said that issuing licenses to gay and lesbian couples would violate her conscience.

In a 3-page motion filed Sunday to the Sixth Circuit Court of Appeals in Cincinnati, Davis' lawyers appealed the judge's decision to jail Davis. According to the AP, the filing amends Davis' earlier appeal to the court and does not include arguments as to why Davis should be released from the detention center where she is being held.

With Davis in custody, deputy clerks at her office began issuing marriage licenses to gay couples on Friday.