Dan Savage: Kim Davis 'is waiting to cash in' 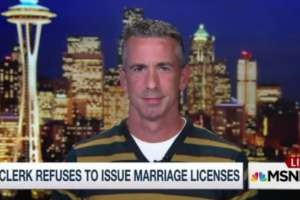 Davis on Tuesday turned away at least four gay couples despite having exhausted all possible legal options.

Appearing on MSNBC's The Last Word, Savage was asked whether Davis wants to be a martyr.

"I actually think Kim Davis does wish to become a martyr," Savage said.

Savage pointed to the case of the Indiana pizza parlor that raised $1 million online after saying that their religious convictions prohibited them from hosting wedding receptions for gay couples.

"I think Kim Davis is waiting to cash in," he said, adding that after she loses her job she'll become a Christian conservative who "will never have to do an honest day's work ever again in her life."

Savage also pointed out Davis' apparent hypocrisy, noting a US News & World Report article claiming that Davis "gave birth to twins five months after divorcing her first husband, [and] they were fathered by her third husband but adopted by her second husband."