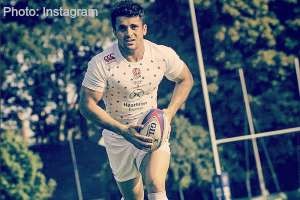 Rugby star Sam Stanley has announced that he's gay, making him Britain's first rugby union star to publicly come out of The Closet.

In an interview with the Sunday Times, Stanley, who played for England Sevens at five tournaments, said that coming out for professional athletes remains an issue.

"It is going to be an issue until more people and athletes come out, until it is not an issue at all," the 23-year-old said.

"It might take years but hopefully lots of people will find the courage."

Stanley said that the fear of coming out drove him to consider suicide.

"I was standing on a bridge about four or five years ago, overlooking a motorway in Essex," he told the paper. "However, looking back, the idea that I would jump was ridiculous but it was as if I was thinking that I could get rid of the pain in one go."

"You are so worried about what people will think and I thought I couldn't be a macho rugby player the way I was, and there was nothing else I wanted to do with my life," he said.

Stanley added that covering up his relationship with Laurence, his partner of five years, has also been difficult.