Keegan Hirst receives outpouring of support after coming out gay 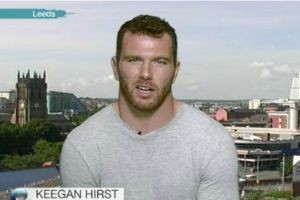 Rugby star Keegan Hirst has received an outpouring of support after coming out gay.

Hirst's announcement made him Britain's first rugby league star to publicly come out of The Closet.

In an interview over the weekend with the Sunday Mirror, Hirst, a 27-year-old father of two, said that he told his wife that he's gay a few weeks ago after realizing that she blamed herself for their recent breakup.

"The support from my teammates and other rugby league players has really surprised me," he told the Mirror. "It's all been positive."

Among those offering their support was former Welsh rugby star Gareth Thomas, who came out in 2009.

"I have given my support to @KeeganHirst days ago," he tweeted. "Today is about him playing the game that defines who he is. #proud."

Nigel Wood, chief executive of the Rugby Football League, congratulated Hirst, the captain of the Batley Bulldogs, in a statement.

"Our sport prides itself on being open and accessible to all communities and I'm also tempted to say that it's not that remarkable," he wrote.