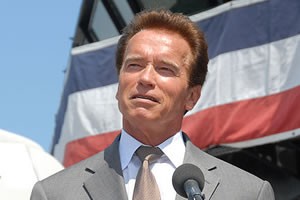 Former California Governor Arnold Schwarzenegger on Friday criticized politicians for not having "the balls" to lead on issues such as gay marriage.

Schwarzenegger, who served two terms as governor ending in 2011, applauded the recent Supreme Court ruling declaring that same-sex couples have a constitutional right to marry in all 50 states.

"When it comes to the Supreme Court, I'm very happy that they made the right decision on that, because we, in California, we're always a step ahead," he said during a press conference for Terminator: Genisys. "We made the decision already a long time ago."

"Everyone has equal rights. So this is the right way to go, and I think it's a great celebration of America."

In comments to PEOPLE, he added: "Sometimes, I have to say that the judges and judiciary system makes better decisions that the politicians. Sadly, that they are not having the balls sometimes to lead and work together on those issues."

During his 8 years in office, Schwarzenegger, a Republican, twice vetoed legislation approved by lawmaker allowing gay couples to marry.