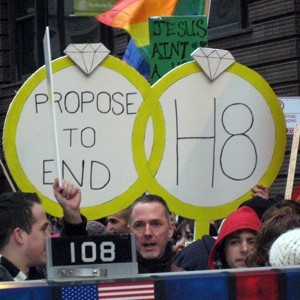 thousands gathered in chicago to protest prop-8 on nov. 15

In November, Thayer helped organize a protest in response to the passage of California's Proposition 8 banning same-sex marriage in that state. He had secured a permit for a rally at Federal Plaza, which drew nearly 5,000 people. Organizers had anticipated 200 participants.

Following the rally, the crowd poured into the Loop for an unplanned march that tied up traffic on State Street and Michigan Avenue. Since organizers did not have a permit to march, Chicago Police Commander Charles Keating reportedly ticketed Thayer.

"The cops say that I alone was nailed for the parade permit violation on that day because it was my name on the Federal Plaza permit and that it would have been hazardous to stop the parade and write tickets for the other 4,999 people there," Thayer told the Chicago Examiner.

Thayer was found guilty even though the prosecutor couldn't prove that he had incited the crowd to march. He received a $500 fine, plus $40 court costs.

"Out of the 5000 marchers, I was the only one charged with a violation of the ordinance. Even though the City produced no credible evidence in the trial that I incited the crowd to march, I was found guilty," he said.

City of Chicago Senior Counsel Scott Sachnoff reportedly offered a lesser fine, but asked the judge to apply an additional penalty found in Section 10-8-330(t) of the Chicago Municipal Code that would bar the permit holder, including any affiliated organization identified on the permit application, from receiving another permit for a year.

The judge denied the City's request and imposed the $500 fine.

"This penalty in the ordinance is a patently unconstitutional violation of the First Amendment right of association, and we undoubtedly would have prevailed many months or years from now in court, but that would not have been very helpful for us in a few weeks time on March 14."

Thayer and other anti-war organizers plan a March 14 anti-war march, which is the 6th anniversary of the U.S. invasion of Iraq.

"The attempt to impose the 1-year permits ban was a last-ditch attempt to derail the permit for the March 14th anti-war action," concluded Thayer.

GLN has established a protesters defense fund to aid Thayer in paying the fine. For more information on the fund or GLN visit www.gayliberation.net.