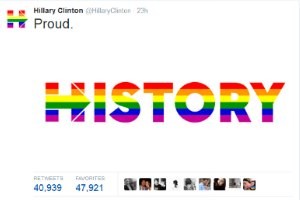 "It was an emotional roller coaster of a day," Clinton said. "This morning, love triumphed in the highest court in our land. Equality triumphed, and America triumphed."

Clinton, who made her remarks at a party fundraiser in Northern Virginia, also vowed to fight discrimination based on sexual orientation and gender identity.

"We can sum up the message from the court and the American people in just two words: Move on," she said, a warning to Republicans.

The GOP , she said, was "determined to lead us right back into the past."

"Instead of trying to turn back the clock, they should be joining us in saying no, no to discrimination once and for all," she added.

Nearly all the candidates seeking the Republican presidential nomination have criticized the Supreme Court's ruling, with most saying that the issue should be left to the states to decide.