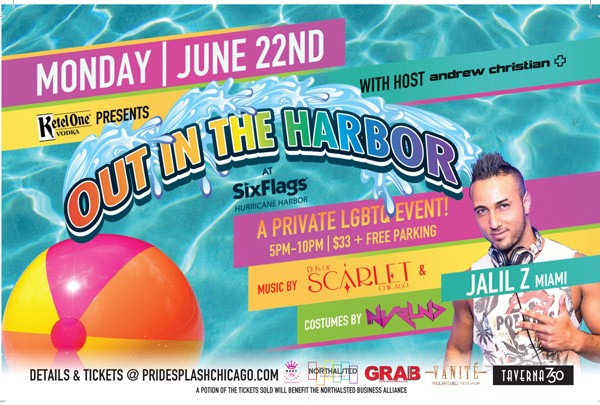 Chicago, IL - Pride Splash (also referred to as Out in the Harbor), an exclusive outdoor waterpark party at Hurricane Harbor slated for today, has been canceled due to the impending severe weather.

"We're just devastated," said Michael Snell of Best Gay Chicago, the event organizer. "We have been rained out before at events, but never canceled."

Six Flags Great America sent the official cancellation notice to ticket holders this morning. "We apologize for the inconvenience but your safety is of the utmost importance," wrote Krystal Bern, Six Flags Special Events Representative.

According to Bern, the valid date of the purchased Pride Splash ticket will be extended so it can be used at any one of the regular operating days thru Monday, Sept. 7.

Six Flags noted that they have only canceled a special event three times in 15 years.

Snell said a smaller Pride Splash party will continue tonight at Scarlet Bar, 3320 N. Halsted, beginning at 5 p.m. Ticket holders will get 2 Ketel One drinks, meet and greet with Andrew Christian and Andrew Christian giveaways. Tonight's party will be hosted by Trannika Rex, with music by DJ Jalil Z from Miami.

Six Flags and Best Gay Chicago essentially took a chance on this year's event and hope it can return next year -- if the weather cooperates.

Next up for Best Gay Chicago is Zoo Pride on Thursday, June 25.