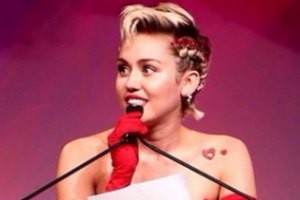 Singer Miley Cyrus and Bravo's Andy Cohen were honored Tuesday for their longtime support for the fight to end AIDS.

Cyrus is currently the spokesperson for MAC Cosmetics VIVA GLAM campaign, which raises funds for the MAC AIDS Fund.

Cohen, host of Bravo's Watch What Happens Live, has chaired multiple amfAR events over the past decade.

At the event, Cyrus, 22, unveiled the Caitlyn Collection, a collection of pieces inspired by the recent debut of Caitlyn Jenner. Three bedazzled and signed copies of Jenner's Vanity Fair cover raised $69,000 for the charity, PEOPLE reported.

In accepting her award, Cyrus pledged to continue her work.

"There are so many people around the world that deserve this recognition," she said. "They've dedicated their lives to finding a cure for those living with HIV and AIDS. And they've used their voices to speak out against the brutal and unfair condemnation and the abominable stigma that comes with this disease. And by receiving this award tonight, I promise to continue to fight along ...for a cure for this epidemic."

"I hope one day that I'm here on Earth to experience an AIDS-free world," an emotional Cyrus added.