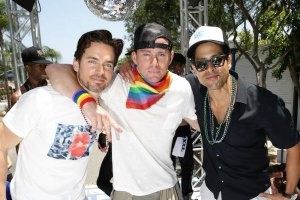 The annual festival draws hundreds of thousands of people to Santa Monica Boulevard in West Hollywood.

The Magic Mike XXL float featured disco balls, posters of the movie's cast and a group of shirtless men dressed as strippers.

Tatum, who was wearing a rainbow bandana, gyrated to Ginuwine's 1996 R&B hit Pony.

Bomer also danced and at one point jumped off the float to hand out Magic Mike XXL shirts and hats to revelers.

The cast and crew of the Amazon comedy Transparent served as the parade's community grand marshals.