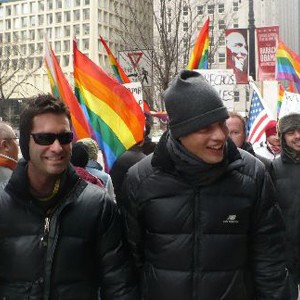 about 400 protesters rallied in chicago

Chicago, IL - Valentine's Day was the backdrop for a planned protest by the Gay Liberation Network (GLN) and the Chicago chapter of the Join the Impact part of a nationwide Freedom to Marry Day event aimed to promote and advocate same-sex marriage.

Seven protesters were arrested Saturday when they refused to leave the Cook County Marriage License Bureau in Chicago after clerks said they would not issue marriage licenses to same-sex couples.

When Buddy Bell and Dale Fecker were refused a marriage license, they were joined by Dan Ware, Danielle Karczewski, Jeff Graubart, Erica Chu, and Nick Ferrin for a sit-in at the Bureau located in the Cook County Building, 118 N. Clark St.

"The law divides society into groups and assigns one group rights while giving lesser rights to the other group. The laws violate the equal protection guaranteed for all citizens under the Constitution," said Ferrin.

Meanwhile, about 400 protesters rallied outside the Bureau and then marched to the Bureau's doors with a chant that's been popular here since last spring, "Obama, Obama, let mama marry mama."

The Chicago protesters saw their action as a way to help sway the California Supreme Court to throw out Proposition 8.

Local issues play a role as well with two bills currently in committees of the Illinois House of Representatives. One calls for the legalization of same-sex marriage, while another bill would call for a constitutional amendment banning it.

Openly gay State Rep. Greg Harris (D-Chicago) introduced a bill on Feb. 4 to create the Religious Freedom and Marriage Fairness Act to provide eligible same-sex and opposite-sex couples with the same treatment as those in a civil marriage.

On Jan. 14, State Rep. David Ries (R-Olney) introduced a bill calling for marriages to be defined only between a man and a woman. Illinois already has a law that prohibits same-sex marriages.

"In all honesty I had mixed feelings about participating in today's events. But I believe I would have regretted not taking this opportunity to stand up and speak up for the cause of equal marriage rights. Someone should stand up and challenge the County Clerk's office and put pressure on our elected officials through raising public support, so why not me," said Chu.

Saturday's legal protest ended when the marriage license bureau closed at noon. The sit-in protesters remained and at about 4 p.m. Chicago police arrested them for Criminal Trespass, a Class C misdemeanor.

The last of those arrested were released from the District 1 Chicago Police Headquarters at 2:15 a.m. Sunday.