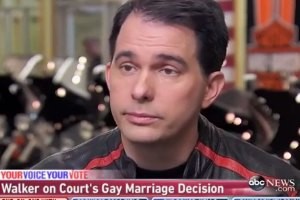 Wisconsin Governor Scott Walker on Sunday said that he would support a constitutional amendment excluding gay couples from marriage if the Supreme Court strikes down state bans on gay marriage.

Walker, a potential Republican presidential candidate, made his remarks during an appearance on ABC News' This Week.

"I believe that the decision defining marriage should be left up to the states," he added.

The high court will hand down a decision this month in a case challenging bans in Michigan, Ohio, Tennessee and Kentucky. The ruling could strike down the nation's remaining 13 bans.