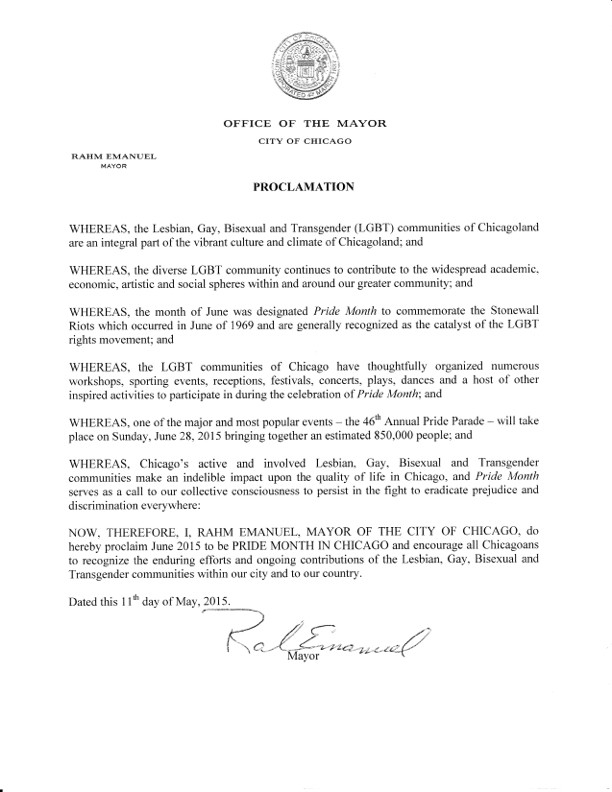 Mayor Emanuel: ‘Chicago’s LGBT communities make an indelible impact upon the quality of life in Chicago’

"WHEREAS, the Lesbian, Gay, Bisexual and Transgender (LGBT) communities of Chicagoland are an integral part of the vibrant culture and climate of Chicagoland; and

"WHEREAS, the diverse LGBT community continues to contribute widespread academic, economic, artistic and social spheres within and about our greater community; and

"WHEREAS, the month of June was designated Pride Month to commemorate the Stonewall Riots which occurred in June of 1969 and are generally recognized as the catalyst of the LGBT rights movement; and

"WHEREAS, the LGBT communities of Chicago have thoughtfully organized numerous workshops, sporting events, receptions, festivals, concerts, plays, dances and a host of other inspired activities to participate in during the celebration of Pride Month; and

"WHEREAS, one of the major and most popular events - the 46th Annual Pride Parade - will take place on Sunday, June 28, 2015 bringing together an estimated 850,000 people; and

"WHEREAS Chicago's active and involved Lesbian, Gay, Bisexual and Transgender communities make an indelible impact upon the quality of life in Chicago, and Pride Month serves as a call to our collective consciousness to persist in the fight to eradicate prejudice and discrimination everywhere.

"NOW, THEREFORE, I, RAHM EMANUEL, MAYOR OF THE CITY OF CHICAGO, do hereby proclaim June 2015 to be PRIDE MONTH IN CHICAGO and encourage all Chicagoans to recognize the enduring efforts and ongoing contributions of the Lesbian, Gay, Bisexual and Transgender communities within our city and to our country."

Obama Pride proclamation: All men are created equal, including LGBTs