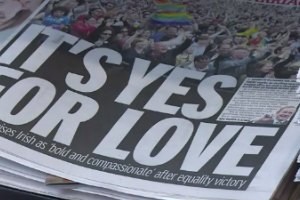 The Vatican newspaper L'Osservatore Romano has described passage of a referendum in Ireland that allows gay couples to marry as "a defeat."

Voters in mostly Roman Catholic Ireland headed to the polls on Friday. The following day, thousands gathered at Dublin Castle's central square, where returns were being announced live on big-screen televisions. The referendum passed with more than 62% of the vote.

(Related: Neither Pope Francis nor the Vatican have officially reacted to the results.

"The margin between the 'yes' and the 'no' votes was too large not to be accepted as a defeat," the paper wrote. "It was the result of high voter turnout, notably among young people."

Reacting to the referendum results, Diarmuid Martin, the Catholic Archbishop of Dublin, said that the Catholic Church "needs to have a reality check across the board."

Martin had argued that the rights of gay men and lesbians should be respected "without changing the definition of marriage."

"I ask myself, most of these young people who voted yes are products of our Catholic school system for 12 years," he added. "I'm saying there's a big challenge there to see how we get across the message of the church."