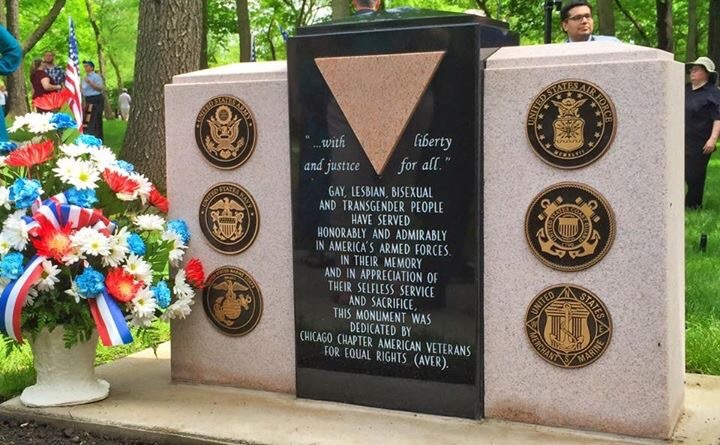 With flags representing all branches of service, along with the rainbow flag for the LGBT community, the monument was unveiled to applause.

"I love this nation more than anything," said Stanley Jenczyk, a Vietnam War Navy veteran and junior board member of the Chicago Chapter of American Veterans for Equal Rights (AVER), who spearheaded the effort during the past four years to get approval for the monument.

The monument was made possible by the efforts of AVER and was approved late last year by Ronald E. Walters, interim undersecretary for memorial affairs. It is intended to redress the history of disregard and disrespect for LGBT veterans with a lasting symbol of recognition.

LGBT service members have served throughout the history of the U.S. military, some of that time under an outright ban supported by regulation and some under Don't Ask, Don't Tell (DADT), a policy supported by law.

DADT was instituted by President Bill Clinton in late 1993, after the long-time anti-gay policy was challenged and became an issue of public debate. Before the Don't Ask, Don't Tell Repeal Act of 2010 was signed into law by President Barack Obama, nearly 14,000 services members were discharged. Work on open trans inclusion continues today as does work to reexamine and upgrade discharges made under DADT.

U.S. Reps. Robin Kelly and Bill Foster attended the ceremony that included a Flag Line led by members of Organized Chaos Chicago ( OCC ), some of whom are active duty or veterans of the military, and the "National Anthem" performed by the Chicago Gay Men's Chorus.

"A recognition of our fallen LGBT service members is long overdue," said U.S. Sen. Dick Durbin in a statement. "This monument serves as a testament to those members of our military who have shown devotion to their country in the eyes of discrimination. It is in their memory that we move toward a more just and equal future."

Related: Video and photos of the historic ceremony by Windy City Times