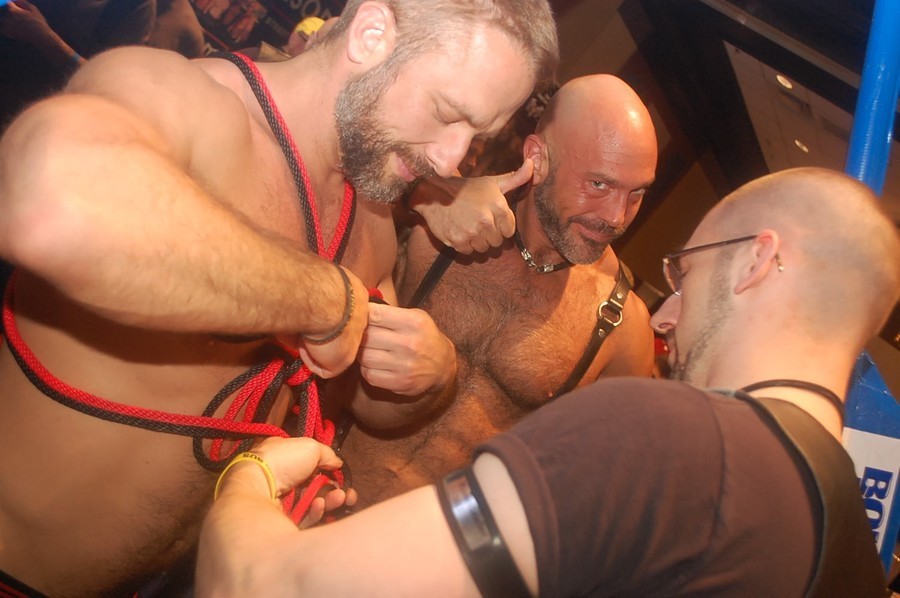 photo credit // anthony meade / chicagopride.com
Chicago, IL - It's that time of year again! Although Memorial Day itself promises to chase away the recent chill settling around Chicago, with temperatures reaching into the high 70s, the weather prediction for this weekend is rain. This, however, won't stop the thousands upon thousands of LGBT people, bears, fetishests, kinksters, and admirers who flock to the city for the trifecta of events: the Grabby Awards, Bear Pride, and International Mister Leather.

Thousands from across the globe will converge on Chicago to drink, eat, and dance the weekend away, welcoming summertime back to our fair city.

Grab Magazine, available at queer locales throughout Chicagoland, is filling the city with adult stars again for its annual Grabby Awards, better known as The Grabbys. The Grabbys honor the best of the best in gay adult entertainment. Some of your favorite stars, and definitely some of the hottest, will be in Boystown and throughout the rest of gay Chicago rubbing elbows and celebrating at the many parties and events surrounding the award show.

The Grabbys themselves moved to the Metro last year and returns to the venue at 3730 N Clark Street on Saturday. The award show is already sold out for the year, but Chicagoans interested in hobnobbing with their favorite stars can catch them at many parties throughout the weekend.

Things kicked off Thursday night with the "Skin Trade" party at Hydrate Nightclub and continued Friday night at Sidetrack, where the Cocky Boys studio were on hand. The boys held an underwear auction where fans bid for underwear right off of their favorite Cocky Boy, with all proceeds going to the Heartland Alliance.

On Friday, the adult stars moseyed on over to the Lucky Horseshoe for the "A-Team Grabby Party," with exclusive appearances by Brian Bonds, Nick Sterling and other favorite stars, including the legendary Brent Corrigan.

More information is available at grabbys.com.

Bear Pride is celebrating its 21st year, and partygoers are all flocking to The Crowne Plaza Chicago Metro, 773 W Madison St, the event's headquarters.

The weekend kicked off in the hotel's ballroom for the "Meet & Greet Party" on Friday. Bear Pride offered a trolley tour on Friday for those new to to the Windy City and for local Chicagoans wanting to get to know their hometown better. A boat tour is scheduled on Sunday, from 1-4 p.m. for $65. You can find out more about these events and buy tickets at bearpride.org.

In addition to a weekend of brunches and bar crawls are a couple great annual parties that bears and bear-lovers alike will not want to miss. Saturday night is the "Boxers and Pajama Party" in the Ballroom at host hotel. Sunday night is the "Nuts to Butts Dance Party" at Transit Nightclub, 1431 W Lake St -- a two dance floor/two DJ party to end all dance parties. Both events start at 9 p.m. and run until close.

New York City's infamous Furball is also returning to Chicago this weekend after an amazingly successful first run last Memorial Day Weekend. Last year's party drew over 800 furry revelers to the Metro for a night of hot men sweating it out on the dance floor to some truly excellent beats. Furball is back and ready to be bigger than ever this year, featuring one of Chicago's own favorites DJ Ron Geronimo and, all the way from London, DJ HiFi Sean.

"The event has grown from a small bear gathering to today's larger party that's aimed toward bears. Especially when Frankie spins we get a lot of different people attending besides bears," organizer Joe Fiore explained. "It's become more inclusive and known as a fun party with good music ... The party has gotten more national attention and has grown and grown up but maintains its heart and soul as a furry event for everyone."

Tickets are available for $16 in advance or $20 at the door. You can read more about this year's Furball on ChicagoPride.com, and also check out interviews with Fiore and DJ HiFi Sean.

IML is returning this year to the Congress Plaza Hotel, 520 S Michigan Avenue, for the first time since 2000. The hotel will be the temporary home of many kinksters and center of activity as well as the home of IML's famous (or infamous) Leather Market. Featuring over 120 vendors from across the U.S., a few from Canada, and even one all the way from Germany, the Leather Market offers an amazing assortment of leather and fetish goods and an even more amazing opportunity for people watching. Those not holding an IML weekend pass will need a Day Pass to enter, with the $10 donation goes to Chicago's own Leather Archives and Museum. The Market opens at 11 a.m. during the weekend, closing at 7 p.m. on Saturday, 5 p.m. on Sunday, and 4 p.m. on Monday.

"At the end of the day, the market is the social hub of the weekend during the daytime," IML Executive Director Jon Krongaard explained to ChicagoPride.com. "People hang out, go shopping, start cruising and go hook up -- if they can take two minutes to look up from their phone," he laughed.

The host hotel will once again feature DJs spinning in the lobby, where competitors, kinksters and other IML revelers gather before and after parties to have a drink, socialize, cruise, and show off their nightly gear. DJ Matthew Harvat, known by many as CircuitMOM, kicked things off "In the Lobby" on Friday night. On Saturday, DJ MF3 spins from 6 p.m. to 10 p.m., with DJ Cody Domino taking over until 2 a.m.

On Friday night, the Congress hosted the "Gear Blast Party" and will be the site of Sunday evening's Woof Camp for pups and their handlers. A complete schedule of parties and events can be found on the IML website. The IML Competition itself takes place on Sunday from 6 p.m. to 9 p.m. at the Harris Theatre, where 2014 winner Ramien Pierre will hand over his title to the newest International Mister Leather after three days of competition.

Two of the weekend's biggest and most highly anticipated events are the Victory Party and Black and Blue Ball, the annual circuit-type parties that bring contestants, winners, and IML revelers together to shake, sweat and dance it out.

Sunday night's Victory Party at the House of Blues, 329 N Dearborn, picks up at 9 p.m., after 2014's winner is announced, and rages until 4 a.m. Matthew Harvat, who is in his 16th year of producing this event, promises to bring it to all new heights this year with an amazing laser and light show to rival any major concert tour ("you better bring it Madonna-2015," Harvat joked.) Vancouver native DJ/Producer Nick Bertossi will be making his IML debut at this year's Victory Party, and you do NOT want to miss it!

Those who've powered through the weekend until Monday night will be treated to the legendary Black and Blue Ball, held at this year at Chicago's largest club, Sound-Bar, 226 W Ontario, from 8 p.m. until 4 a.m. DJ Barry Harris and DJ Steve Henderson will spin in the Sound-Bar Main Room, with DJ Milty Evans at the Y Bar Chicago (located next door) spinning in the Pregame Lounge from 7 p.m. to 10 p.m. Tickets are included in all IML weekend packages. Limited single event tickets are on sale now at Full Kit Gear Chicago and are also available at the host hotel over IML weekend. Free IML shuttles will run all evening from Congress Hotel to Sound-Bar, from 7:30 p.m. until 4:30 a.m., every 15 minutes

Scruff and CircuitMOM are also bringing the first large-scale leather themed party to Boystown in over a decade! On Monday they will take over Circuit, 3641 N Halsted, with "Rebel Leather" featuring Chicago's favorite Jade Sotomayer as hostess and the one and only NYC DJ/Producer Eddie Martinez. Limited advanced tickets are available for only $10 at Cram Fashion, 3331 N Broadway, or for $20 at the door.

"With our new event, 'Rebel Leather,' we wanted to give Boystown a big event in their own backyard," Harvat told ChicagoPride.com. "Easy to walk to, amazing sound and laser show, a great venue where people can come experience again (maybe for the first time) and show our community spirit...we felt it was time to bring a big party in a big space back to Boystown. What better weekend to kick it off?"

So get ready to stuff your phone and cards in your tube socks and show off that new collar from Sir, because Memorial Day is here, gay Chicago! Despite the weather prediction, we can definitely expect another scorcher this year.

Find a complete list of the weekend's events at ChicagoPride.com.