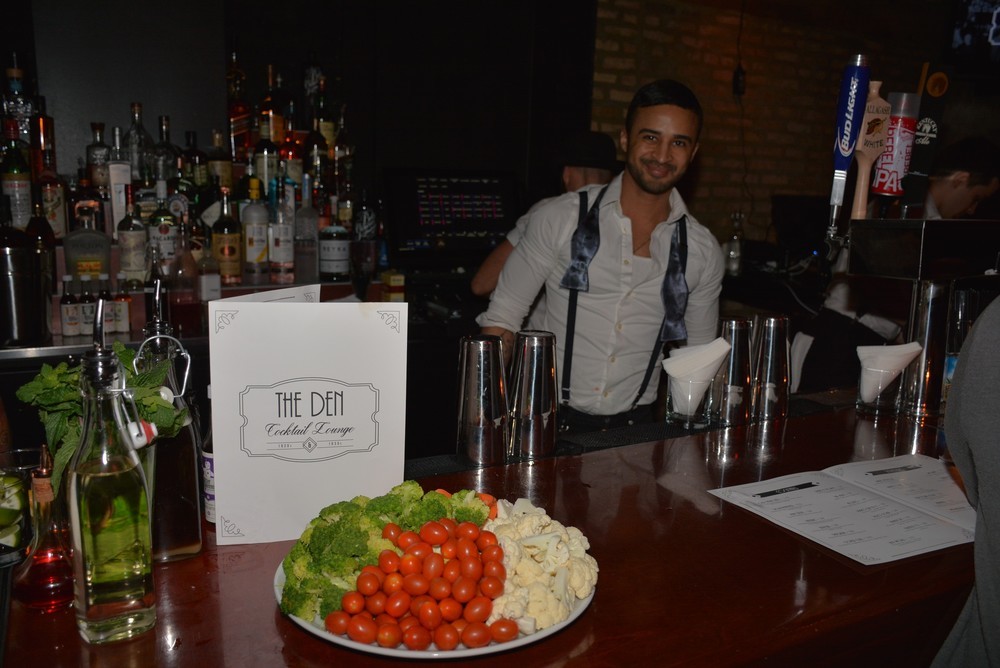 photo credit // ken brown
Chicago, IL - Bringing back the vibe of the gentlemen's social clubs of 1920s and 30s, The Den Cocktail Bar officially opened Thursday, May 21. ChicagoPride.com got an exclusive taste of The Den's offerings during its VIP reception before opening its doors to the public.

Taking up the top floor of 3200 N. Halsted St., The Den houses a main bar area, lit dimly with red lighting, offering classic cocktails evocative of the period that one can imagine Ernest Hemingway or F.Scott Fitzgerald sipping: Dark & Stormy, Old Fashioned, Sazerac, and the Sidecar, to name but a few. The Den also offers its own "Signature" speciality cocktails that play on the period's theme. And for folks who can't figure out what the difference is between a digestif and an apéritif, the bar also serves beer.

Adjoining the Den is a larger space with several black leather-studded grandfather lounge chairs, bar stool seating areas, and a pool table. We were there before sunset, so the lounge space was lit brightly. A small pop-up shop with leather goods is located between the bar room and larger lounge area, which was somewhat of a surprise to encounter in the period-themed bar. To round out the spaces, the Den also has a patio, which at the time of our visit was closed.

Former patrons of Spin Nightclub or even Whiskey Trust might notice some superficial similarities of the bar and the adjoining lounge space, since both once lived where the Den now stands. LKH Management, the entertainment group that manages Hydrate, Replay, and Elixir, however, has refurbished the Den's space with an eye for details combining period elements with contemporary flourishes like the leather lounge chairs, the uniforms of the waiters and bartenders, the art deco-esque typography used on the cocktail menu, and the electronic remixes of flapper music which were playing during our visit.

About the Den's period theme, general manager Collin Wood told ChicagoPride.com, "The re-concept is an inviting lounge that expands our customer demographic." With the newly re-opened Manhole so close in proximity to to the Den (Manhole is located directly below), it might come as no surprise that the night of the VIP reception there were patrons wearing leather gear interspersed with men in swank attire—surely interesting demographics, whether planned intentionally or not.

The Den Cocktail Bar is operated by LKH Management, which also owns Hydrate, Replay, Elixir and Halsted's in Boystown with plans to expand Replay and Elixir locations in Andersonville this summer.