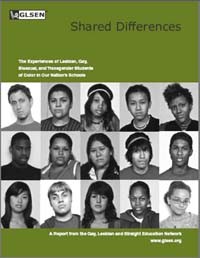 Shared Differences: The Experiences of Lesbian, Gay, Bisexual and Transgender Students of Color in Our Nation's Schools was prepared by GLSEN, the Gay, Lesbian and Straight Education Network using data collected in 2007.

The report documents the experiences of over 2,000 LGBT middle and high school students of color who were African American, Latino, Asian, Native American, and multiracial.

"While research on the experiences of LGBT students has increased in recent years, few studies have examined the specific victimization of students who identify as people of color and LGBT," said GLSEN Executive Director Dr. Eliza Byard. "Our schools are diverse environments, and it is important to understand how our students experiences differ based on personal characteristics such as race and ethnicity. This report provides alarming evidence that we must act now to ensure sure that America's LGBT students of color are safe in school."

The study found that across all groups, sexual orientation and gender expression were the most common reasons LGBT students of color reported feeling unsafe in school.

More than four out of five students, within each racial/ethnic group, reported verbal harassment in school because of sexual orientation and about two-thirds because of gender expression.

At least a third of each group reported physical violence in school because of sexual orientation.

About a quarter of African American/Black and Asian/Pacific Islander students had missed class or days of school in the past month because they felt unsafe.

The report also found that performance at school also suffered when students experienced high levels of victimization. Students' overall GPA dropped when they reported high severities of harassment based on sexual orientation and/or race/ethnicity.

For all groups, LGBT students of color who were minorities in their school were much more likely to feel unsafe and experience harassment because of their race or ethnicity than those who were in the racial/ethnic majority.

GLSEN is releasing the report in conjunction with Dr. Martin Luther King, Jr. Organizing Weekend, which takes place January 16-19. Dr. MLK Jr. Organizing Weekend provides an opportunity for students and Gay-Straight Alliances to honor the coalition-building work of Dr. King and other civil rights leaders, such as Bayard Rustin, by reaching out to others committed to working toward safe schools for all students.