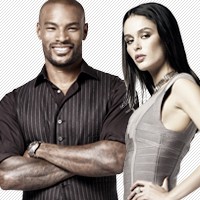 tyson beckford and nicole trunfio from make me a supermodel

Winning Model Will Be Featured In Cosmopolitan Magazine

New York City - Bravo's "Make Me A Supermodel" returns for season two on March 4th. On Wednesday, Bravo announced the 16 finalists for the new season and another Chicago resident is in the running.

Libertyville native Chris, 22, is according to the Bravo Web site "inspired by art—music, fashion, design. He believes they all run parallel. Chris dreams of becoming a supermodel and using his design sense and influence to create a high-end fashion line of accessories. Trained at the California Design College in LA, he currently works at the Spanish clothing store, Zara, when he is not working modeling jobs."

The creative competition series, which premiered in January 2008, follows a group of models as they compete for $100,000 prize, a contract with New York Model Management, a fashion pictorial in Cosmopolitan magazine, and the chance to become the next great supermodel.

In season one, Holly Kiser, a 21-year-old from Coeburn, VA, took home Make Me a Supermodel's title, which included $100,000 and a modeling agency contract with New York Model management. Kiser bested Chicago's Ronnie Kroell for the title.

Kroell, from Chicago's Andersonville neighborhood, was the last remaining male model receiving the second most votes in the first season. One of the most played-up plot lines from the season was Kroell's "bromance" relationship with Ben DiChiara, his straight, married roommate in the models' house.