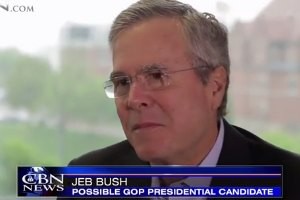 In an interview with Christian broadcaster CBN's David Brody, Jeb Bush, the former governor of Florida, said that he does not believe that gay couples have a constitutional right to marry.

Bush, a likely candidate for the 2016 Republican presidential nomination, told Brody that he plans to "work hard" in Iowa.

When asked about marriage equality, Bush said that he believes traditional marriage is "a sacrament."

"To imagine how we are going to succeed in our country unless we have committed family life, committed child-centered family system is hard to imagine," he said. "So, irrespective of the Supreme Court ruling, because they are going to decide whatever they decide, I don't know what they are going to do, we need to be stalwart supporters of traditional marriage."

"Do you believe there should be a constitutional right to same-sex marriage?" Brody asked.

"I don't, but I'm not a lawyer," Bush answered. "Thousands of years of culture and history are being changed at warp speed. It's hard to fathom why it is this way."

Elsewhere in the interview, Bush said that he supports the rights of businesses to deny services to gay men and women based on their "moral beliefs."

"A big country – a tolerant country – ought to be able to figure out the difference between discriminating someone because of their sexual orientation and not forcing someone to participate in a wedding that they find goes against their moral beliefs. We should be able to figure this out.This should not be that complicated. But gosh. it is right now," Bush said.