Conchita Wurst's debut album arrives May 26 in US 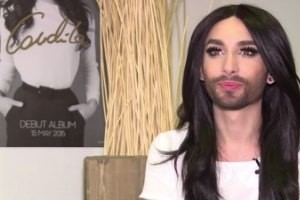 Conchita Wurst's debut album, Conchita, arrives in the United States on May 26.

Amazon.com is taking pre-orders for the audio CD.

Released Friday in Europe by Sony Music Austria, Conchita includes the singles Heroes, You Are Unstoppable and Rise Like a Phoenix, which she performed during last year's Eurovision Song Contest.

"I created this album in a very selfish way, if I'm honest," Wurst, known as the bearded drag queen, told the AFP. "I really wanted to entertain myself in the first place, so that's basically a very personal track list or the sound track of my life."

"I really wanted to have all these different music genres on my first album."

"We all love someone and we all had a broken heart at some point, so these are topics I wanted to sing about, because obviously they're in my life as well," she added.