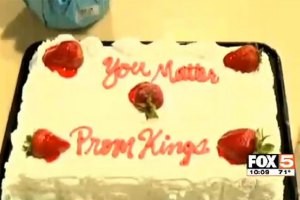 Las Vegas, NV - A Walmart in Las Vegas refused a woman's request for a cake that included the word "gay" for her gay nephew who was attending his high school prom with his straight friend.

Lescenski told DeGeneres that he decided to ask Martinez to the prom after reading on Twitter that his friend did not have a date to the event. Lescenski's "promposal" included a sign held up by friends which read, "You're hella gay, I'm hella str8, but you're like my brother, so be my d8?"

Jennifer Sandoval, Martinez's aunt, wanted to surprise her nephew with a cake, but Walmart said it could not write "You're gay, he's straight, you're going to prom, you couldn't have had a better date" on the cake because it included the word "gay." She ended up buying a cake which read "you matter, prom kings."

Sandoval told KVVU that two employees, including a supervisor, told her that store policy prohibits use of the word "gay." A Walmart spokesperson told the station that there is no such policy.

"It wasn't hurtful," Sandoval told KVVU. "It was to make my nephew happy, to see a smile on his face. I love that smile. To see that smile, that's all I wanted. And I'm disappointed. I really am."