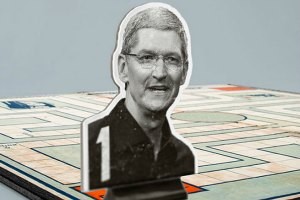 The 54-year-old Cook returned to the top spot in this year's list of the most influential gay people, knocking out last year's champ talk show host Ellen DeGeneres.

Cook, who claimed the top spot two years ago, came out gay in October, becoming the only openly gay CEO in the Fortune 500.

"Despite some negative reactions — notably in Russia —the world responded largely with a shrug, and continued its massive love affair with the tech giant," Out editors wrote. "Cook's diversity initiative extends beyond his own eloquent coming out. He has added three women to Apple's executive team and altered Apple's charter in order to commit the company to pursuing women and minorities for the board of directors. That's progress."

Actress and transgender advocate Laverne Cox (Orange Is The New Black) claimed the ninth spot, becoming the first transgender person to finish in the list's top 10.