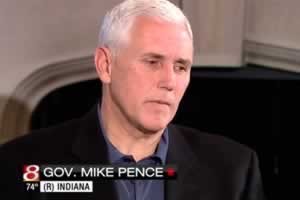 Indianapolis, IN - Republican leaders in the Indiana House have tabled an attempt to prohibit discrimination based on sexual orientation and gender identity in the areas of housing, employment and public accommodations.

Democratic Rep. Ed DeLaney of Indianapolis made the proposal in response to an uproar over passage of a so-called religious freedom bill that opponents argued would allow businesses to deny services to gay men and lesbians. The backlash led Republican Governor Mike Pence to ask lawmakers for a "fix" to the law. Language added to the bill states that businesses could not use it as a legal defense for refusing to provide services to gay couples.

"I think the state needs to stop suffering about this," DeLaney told the AP. "The discussion about the religious freedom law has not ended, either on a local or a state or even national basis. ...I think it is time to get this behind us."

Republicans on Tuesday said that the proposal didn't meet House rules for consideration.

"If we are going to have the protected class discussion, that's a pretty deep dive, and there are a lot of issues from both sides that need to be fully taken into consideration," said House Majority Leader Jud McMillin, a Republican from Brookville. "It would be best to do that throughout the course of an entire session."

Pence has previously said that he's opposed to such laws.