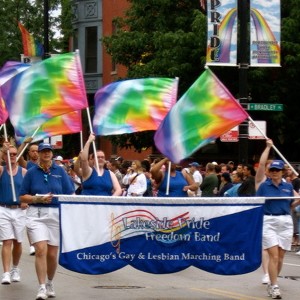 photo credit // www.lakesidepride.org
Chicago, IL - Chicago's Lakeside Pride Music Ensembles, part of The Lesbian and Gay Band Association (LGBA), will march in Barack Obama's Inauguration Parade on Jan. 20. The LGBA, a national band with members fro across the country, will be the first openly gay band to march at a Presidential Inauguration Parade.

"I am honored to invite these talented groups and individuals to participate in the Inaugural Parade," Obama said in a news release. "These organizations embody the best of our nation's history, diversity, and commitment to service. Vice President-elect (Joe) Biden and I are proud to have them join us in the parade."

The Lesbian and Gay Band Association, founded in Chicago in 1982, consists of 34 concert and marching bands across the country. A 177-piece band organized by the group will join other bands from across the country in the parade down Pennsylvania Avenue. The parade occurs after the swearing-in ceremony at the Capitol.

The Lesbian and Gay Band Association previously performed at the inauguration celebrations for President Bill Clinton, but did not march in Clinton's inauguration parade. Over 1400 marching bands applied to perform in Obama's Inauguration Parade, and only a few dozen were selected.