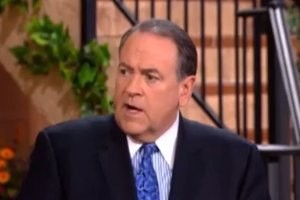 Governors in both states on Thursday signed revised versions of the bills after business leaders and gay rights advocates voiced opposition to the measures. Critics said that the law's broad language might be used by businesses to refuse service to gay men and lesbians.

Huckabee called the controversy a "phony crisis" during an appearance on FRC's Washington Week radio program.

"It's been manufactured by the Left, just as was the war on women," Huckabee said. "There was no war on women. The Left has gotten very good on creating a crisis, something to divide the country, something to create this sense in which 'we've got to go after these conservatives because they are trying to trample over our rights.'"

"Where will it stop?" FRC President Tony Perkins asked.

Elsewhere on the program, Huckabee had to walk back a comment that Christian conservatives would never boycott a business after Perkins stated that he was planning to boycott Walmart over its opposition to Arkansas' bill.