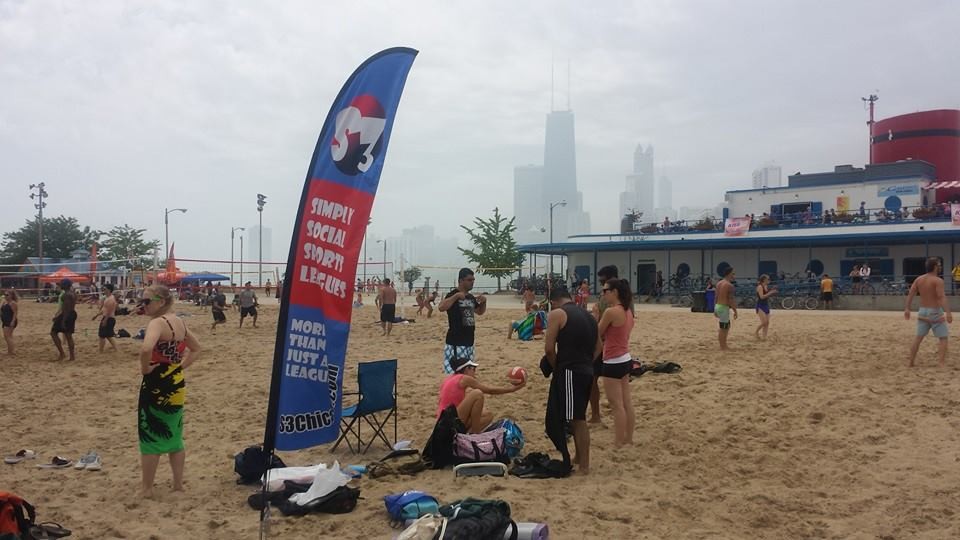 Chicago, IL - Start practicing your bump/set/spike and your salt/tequila/lime, gay Chicago, because a new beach volleyball league is coming to Boystown and bringing good times and new friends along with it. S3 Simply Social Sports Leagues is teaming up with sponsor bar DS Tequila to host its first league aimed at the LGBT community this spring and founder Ben Shimon thinks the two are a perfect match.

"I always knew it would be a good idea but it's hard to find space to play and also to find a good partner bar to make sure it's a great league," Shimon, Founder of S3, told ChicagoPride.com. "Once I got courts up at Montrose Beach, right by Boystown, and an awesome sponsor bar in DS Tequila Company, it was the perfect time to go for it. And because of... how fun the leagues are, it'll be awesome for the LGBT community."

The emphasis here is definitely on having fun and being social. After each game, teams return to sponsor bar DS Tequila to drink and hang out, with S3 buying each team's first pitcher and DS providing special food and drink specials after that. DS Tequila will also be providing a free shuttle bus to and from the bar and the Montrose Beach volleyball courts, so stopping by to pre-game won't be a problem.

"We want anyone who's looking to have fun being active and social to join," Shimon said. "You DO NOT have to be a good volleyball player... It's going to be the biggest and best events/parties on Tuesday nights all summer long!"

Shimon met most of his current friends in a softball league he joined after moving to Chicago -- "friends of friends of friends all making a team and becoming friends," he says. The league itself, however, was poorly run and Shimon, knowing he could do better, founded S3 7 years ago. His first league focused on singles, where everyone joined in small groups or by themselves and teams were organized by age group.

The league now is called "Simply Social" instead of "Singles Social" and consists of softball and kickball teams in the spring and in addition to beach volleyball and winter leagues including Bowling, Whirlyball, Dodgeball and Skeeball among others. Each league pairs with a sponsor bar so that teams socialize both amongst themselves and with the rest of the league.

"We focus more on having fun than being super competitive," he continued. "Leagues are an amazing way to really get to know people and build relationships since you get together with the same group for several weeks during the season."

The Boystown league will play every Tuesday for five weeks at the Montrose Beach volleyball courts, with games starting at either 6:30 or 7:30 p.m. (times will rotate weekly). Players (although it's an LGBT focused league anyone is welcome) can sign up individually and be matched with a team of players close to their age, join with a few friends or join as a full team of 6-10 people. Fees are $55 per person, including a free team t-shirt, or $450 per team (only $45 per person), but Shimon is offering ChicagoPride readers a special deal. Just put "ChicagoPride" in as your referral to receive a $5 refund on league fees!

Games start on May 26 and wrap up June 23 with a final playoff tourney night. Before games start, players will have a chance to meet their team, pick up their shirts and choose their team names and captains at the initial event on Tuesday, May 19 at 7 p.m. at DS Tequila.

According to Shimon, there will be another Boystown summer league directly after this first session ends and, if all goes well, he definitely sees S3 expanding into other sports aimed at the LGBT community as well.

The league only holds room enough for eight teams (that's 80 players maximum) so don't hesitate to sign up by visiting https://gopride.com/Zbdc to check out the rest of the details and register.