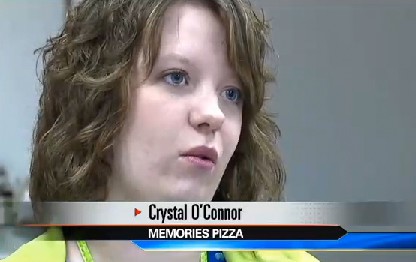 South Bend, IN - The owner of a small-town pizza shop in Northern Indiana has become one of the first business to publicly say they will deny service to gay and lesbian customers after Indiana Gov. Mike Pence signed the Religious Freedom Restoration Act last Thursday.

"If a gay couple came in and wanted us to provide pizzas for their wedding, we would have to say no," Crystal O'Connor of Memories Pizza told South Bend's WBND-TV. "We are a Christian establishment."

The family-owned restaurant is located in Walkerton, a small community of 2,000 near South Bend.

Gov. Pence told reporters Tuesday that the new law does not allow discrimination against gays and lesbians and promised clarification; however, the Republican said he would not add sexual orientation and gender identity to the state's civil rights laws.

"I abhor discrimination," said Pence. "But as I said, we've – we've got a perception problem here, because some people have a different view. And we intend to correct that."

Many opposed to O'Connor's stance have taken to rallying on Yelp.

"I wanted some pizza after my klan rally so of course it was memories pizza," read one review posted on Wednesday.

Another reviewer said, "I came in with my boyfriend a few weeks ago for a couple of slices. They told of us the good word of Jesus's love. Which was all great until we told them we were engaged to be married, at which point they spit on us and bashed us upon the head and torso with pizza pans. They said it was all in the name of Jesus so I guess it's not all bad. I choose never to give them my business anymore, because..ya know... that's my choice."