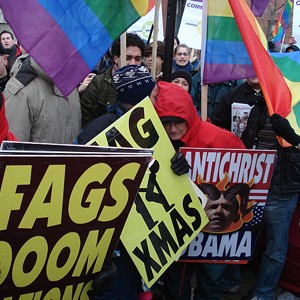 Anti-gay protesters give up and retreat to local police station

Chicago, IL - Members of Fred Phelps' Westboro Baptist Church in Kansas were in Chicago last Saturday to spread their anti-gay message on the doorstep of the Center on Halsted in Chicago's Lakeview neighborhood.

Church members, mostly members of Phelp's family, have been in town for the past week protesting at many sites throughout the city including several consulate offices and President-elect Barack Obama's transition office downtown.

Their attempt to protest at the Center on Halsted, Chicago's gay and lesbian community center, was halted when more than 100 people arrived to counter the message of hate.

Westboro members, overwhelmed by the number of counter protesters, moved their planned protest from the Center on Halsted to the 23rd District Police Station at Addison and Halsted.

The mass of counter protesters surrounded the Westboro members, which numbered about 5, and effectively blocked their anti-gay message with large pro-gay signs and blankets.

Not long after the protest began, the Westboro members realized they were outnumbered and asked the police for an escort into the police station where they could seek refuge.

One passerby said "You can spread your hate where ever you want, but you can not come to our front door and expect us to sit here and let you do it."

No arrests were made at Saturday's protest in Chicago.

Topeka, Kansas-based Westboro Baptist Church, is not affiliated with a larger denomination and is made up mostly of Phelps' extended family members. Phelps and his church gained national attention when they protested at the funeral of Matthew Shephard with signs that read "No Fags in Heaven" and "God Hates Fags."

Phelps and his church is also known to condemn Muslims, Roman Catholics and Jews.

According to published media reports, The Southern Poverty Law Center classifies the church as a hate group and the organization is monitored by the Anti-Defamation League.