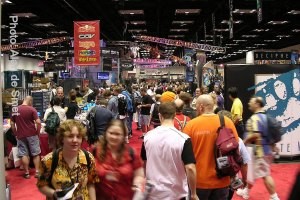 Indianapolis, IN - Organizers of Gen Con have threatened to leave Indiana if Governor Mike Pence signs a bill that opponents say would allow businesses to refuse to serve the LGBT community based on religious beliefs.

The Republican-led General Assembly gave its final approval of SB 101 Tuesday and sent it to Pence for his signature.

Pence has said he's "looking forward" to signing the measure.

According to Polygon.com, Gen Con LLC, the parent company of Gen Con, a successful gaming convention held annually in Indianapolis, has threatened to take its convention elsewhere if the bill becomes law.

Passage of the bill "will factor into our decision-making on hosting the convention in the state of Indiana in future years," Gen Con LLC CEO and owner Adrian Swartout said in a letter to Pence.

"Last year, Gen Con hosted more than 56,000 attendees from more than 40 different countries and all 50 states," Swartout wrote. "Gen Con proudly welcomes a diverse attendee base, made up of different ethnicities, cultures, beliefs, sexual orientations, gender identities, abilities, and socio-economic backgrounds. We are happy to provide an environment that welcomes all, and the wide-ranging diversity of our attendees has become a key element to the success and growth of our convention."

"Legislation that could allow for refusal of service or discrimination against our attendees will have a direct negative impact on the state's economy," he added.

According to Polygon.com, the four-day event "creates in excess of $50 million in revenue for the city of Indianapolis."