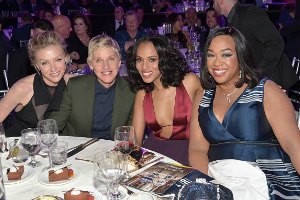 Los Angeles, CA - Actress Kerry Washington was presented with an award for her gay rights advocacy by Ellen DeGeneres on Saturday at the 26th annual GLAAD Media Awards at the Beverly Hilton in Los Angeles.

Washington is best known for playing Olivia Pope, a crisis management expert to the president of the United Stated, on the ABC drama Scandal.

GLAAD honored Washington with its Vanguard Award, which is "presented to artists and media professionals who, through their work, have increased the visibility and understanding of the lesbian, gay, bisexual and transgender community."

The 38-year-old Washington told the crowd "there is enormous power in inclusive storytelling."

"So, when black people today tell me they don't believe in gay marriage," Washington said with a glare that got the crowd on its feet.

I tell them, "' You know, people used to say stuff like that about you and your love. And if we let the government start to legislate love in our lifetime, who do you think is next?' ...We must be allies," she added.